On this episode of Blunt Force Truth, Chuck and Mark are joined by Erick Robertson. Erick spent over a month at Ground Zero with his cadaver dog. He has now devoted himself to ensuring that people do not forget what happened on September 11, 2001.

Chuck and Mark kick off the show by asking Erick how he found himself at Ground Zero. Erick walks us through his story of driving across the country to get to there and his reaction when he first saw the site. He shares how he is still dealing with health issues from spending time at Ground Zero.

They continue their conversation by asking Erick about his 9/11 traveling memorial. They discuss the importance of remembering what happened that day and who was behind the attack. They explain why it is critical to prevent the radical left to play down the significance of the event. Erick explains why his goal is that 9/11 will no longer be talked about one day a year. 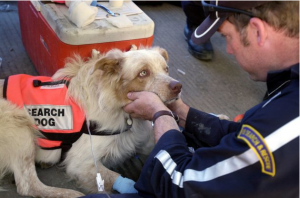 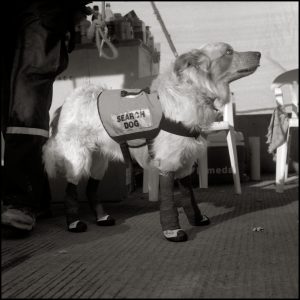 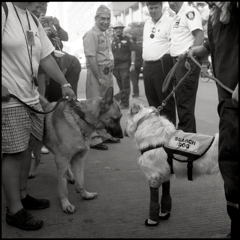 On 9/11/2001, Erick Robertson walked into work at an Emergency Room in California to see people crying and watching the events of the attacks unfold on national TV. Having seen the “call for help” being crawled across the TV screen, he ran back to his office and called the number he had seen. HE was shocked to have gotten through on the first attempt. He was told to come; they did not know how, but they needed help and “all the dogs they could get.”

It was only a short time later that Erick and his Search and Rescue Cadaver Dog Porkchop began their drive to New York City. After driving nonstop for two days, he arrived and went to check in where all First Responders were asked to meet up and register. At that exact moment, he was told to “just get back in your car and go home. We don’t need you.” He did not leave. Less than 12 hours later, he was assigned to the NYPD K-9 unit and began the work of a SAR Cadaver Dog handler.

From the moment Erick turned the corner that allowed him to see the horrific aftermath of the World Trade Center collapse, his life was changed forever. 18+ years later, he is now telling America the story that 9/11 did not end in 2001 and that 9/11 is a day that will no longer be talked about only once a year.

Help us bring you the best content possible. Due to the left’s boycotts of those who advertise with Conservatives, we have had a number of advertisers backout to avoid possible backlash. Support the show and gain access to even more content at https://www.patreon.com/bftpodcast

Don’t forget to leave us a voicemail for the chance to have it played on a future episode. You can do so by clicking the link. https://bluntforcetruth.com/voicemail/

Also, check out the store on our website to get your own Blunt Force Truth gear. https://store.bluntforcetruth.com/