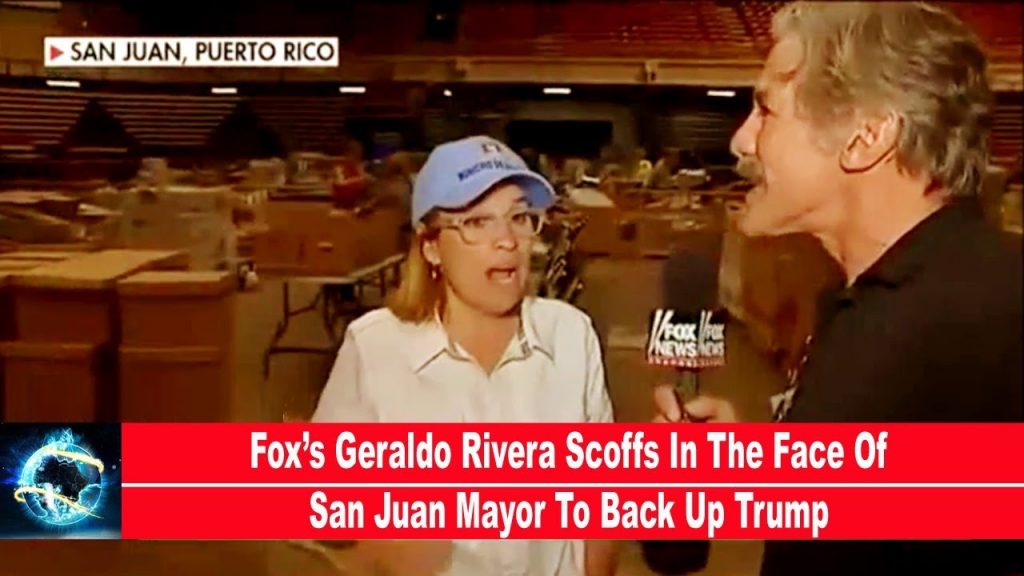 Fox News’s Geraldo Rivera has been in Puerto Rico for a week now following the plights of individuals after Hurricane Maria destroyed large swaths of the island. Thirty-four people have now died in the wake of the storm. However, help is on the way. Rivera, who got the chance to reunite with his Aunt Ellie, has toured the destruction and witnessed the initial relief efforts, meaning he has a pretty good handle on how things are operating. As such, he felt the need to correct what he calls a slew of “fake news” items that are intended to undercut President Trump’s efforts on behalf of the Puerto Rican people. That latter scenario may be working – a new Associated Press survey finds only 32 percent of people approve of his response.

For one, Rivera quickly debunked the false narrative that Trump was not adequately addressing the cholera outbreak. It turns out, there is no cholera outbreak. The New York Times‘s Paul Krugman, who tweeted the false report, admitted his mistake, but not before thousands of people had retweeted it. The president has also been criticized for his rhetoric since visiting the island. For instance, he told Puerto Rican leaders they should be “proud” they did not have as near as many casualties as Hurricane Katrina.

Did he misspeak? Yes, but to suggest the president was intentionally insensitive to Puerto Rico’s struggle is hardly fair.

“They’re special people,” Trump told  Rivera during his visit to the island. “I love the Puerto Rican people. We have to help.”

His team has done a “fantastic” job, the president said, but unfortunately their work has “not been appreciated” thanks to the media.

In addition to making up stories, the media has been quick to report on San Juan Mayor Carmen Yulin Cruz‘s feud with Trump. She has been slamming Trump for tweeting instead of actually helping. Rivera asked Trump how he felt about her public rebukes.

The president observed that Cruz was “nice at the very beginning,” then got “nasty.”

He mused at the change of heart, taking a guess that she was running for office. Well, as it happens, Cruz is the likely Democratic candidate for governor in 2020.

“It turns out I was right – gee isn’t that a shock,” Trump said.

The president may not be thrilled with the chilly welcome he received from Cruz, nor the media’s narratives, but he had plenty of praise for Puerto Rico’s “amazing” Gov. Ricardo Rossello, as well as the Navy, Army, Air Force, Marines, and any other groups and individuals who are devoting their days to the relief effort.

We’re going to get Puerto Rico “back on its feet,” Trump pledged.

The president and First Lady Melania Trump were embraced by “99 percent” of the people, Rivera said.

Aid is stepping up, but the Puerto Ricans’ plight is far from over. In his brief conversation with Rivera, Gen. Jeff Buchanan, who is leading the response, noted that they “really need fuel.” The shipments have been stalled because seaports and airports were closed for quite some time. They are now open.

“Do you think the worst is over,” Rivera wondered.

“We’ve got a long way to go,” Buchanan sighed.