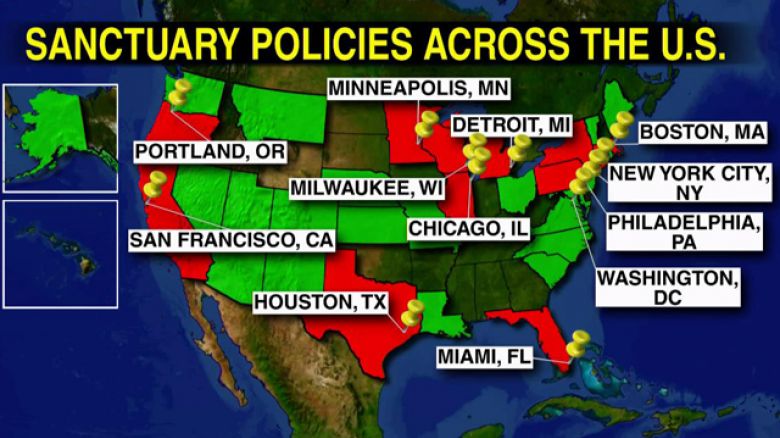 So-called “sanctuary” jurisdictions are cities, counties, and now even whole states that have policies designed to hinder federal agents attempts to catch and deport illegal aliens.
Before your liberal relatives and guests start talking about how we need sanctuary policies “to build trust” and how the Trump administration’s efforts to rein them in are unconstitutional, here are seven big things you should know.

Sanctuary cities in America started in the 1980s, when San Francisco began to protect criminals and arrestees held in their jails from what was then called the U.S.  Immigration and Naturalization Service (INS). From that seed grew a body of over 300 cities, counties, and states that openly declare, in stated ordinances, policies, or state laws, that they will refuse to inform federal authorities about illegals in their custody, ignore Immigration and Customs Enforcement (ICE) “detainer” requests and release illegals – even those still due back to face criminal charges – right back into the communities they were arrested in, or even prohibit their own employees and law enforcement officers, on pain of dismissal, to even ask about whether someone is an illegal alien.

The current controversy over sanctuary cities came when the newly inaugurated President Donald Trump issued his executive order on interior enforcement, claiming, “Sanctuary jurisdictions across the United States willfully violate Federal law in an attempt to shield aliens from removal from the United States.  These jurisdictions have caused immeasurable harm to the American people and to the very fabric of our Republic.”

The move immediately set off a wave lawsuits from sanctuary jurisdictions and inspired entire states to openly declare they will join the ranks of jurisdictions that refuse to cooperate with ICE. These include the entire state of Illinois.

2. The “building trust” argument is a farce.

The most commonly cited reason for jurisdictions ignoring ICE detainers or prohibiting cops from finding out if criminals and arresttees are in the U.S. legally is that it “builds trust” with the “immigrant community.” The argument even lent its name to Illinois’s state bill to go sanctuary, the “Illinois Trust Act” signed by Republican governor Bruce Rauner.

The argument, espoused by Hillary Clinton and other major Democratic politicians, is a relative newcomer to national politics. Even Sen. Diane Feinstein (D-CA) blinked in the aftermath of Kate Steinle’s murder at the hands of an illegal alien multiple felon released by sanctuary city San Francisco.

The “trust” argument ignores the people to whom American municipalities actually have a duty: the U.S. citizens they watch over. These people “trust” their government to protect them from illegal alien crime, but, in sanctuary jurisdictions, their government wants illegals’ trust, not theirs. As advocates for victims of this preventable crime, like remembrance project founder Maria Espinoza point out, “If our immigration laws had been enforced, the crimes would not have happened,” and they are tired of politicians putting their interests behind that of illegal aliens.

Another argument is ever-present and ever-pressing on sanctuary city supporters: “cheap labor and cheap votes.”

3. Attorney General Jeff Sessions is leading the way to rein them in.

As the nation’s top law enforcement officer, Jeff Sessions is man President Trump picked to get his executive order moving. He did so quickly, announcing, in March, his plan to deny billions of dollars in law enforcement grants to sanctuary cities.

When liberal federal judges in California, in response to suits from sanctuary counties there, began to question what the definition of “sanctuary city” was and whether the definition in the executive order was too broad, Sessions himself promptly issued a memo defining the term: violation of 8 USC § 1373, the law, passed in the 1990s to prevent sanctuary cities, that state jurisdictions “may not prohibit, or in any way restrict, any government entity or official from sending to, or receiving from, [federal immigration officers] information regarding the citizenship or immigration status, lawful or unlawful, of any individual.”

In April, Sessions warned ten of the worst offending cities and states that they must show full compliance with 8 USC § 1373 or lose lucrative DOJ grants. Last week, a second round of letters went out to 29 more jurisdictions, including the newly non-compliant State of Illinois. Sessions also ensured non-sanctuary jurisdiction also will get priority consideration for COPS grants, another major DOJ program.

4. Some sanctuary cities are getting the message.

Seeing which way the wind blew, Miami-Dade County dropped its sanctuary intransigence shortly after Trump took office. According to DOJ and the Center for Immigration Studies, several other former sanctuary jurisdictions are now compliant, including Clark County, Nevada – home to Las Vegas – and Milwaukee, Wisconsin.

Sessions also had stern words for Jurisdictions that continue to flout federal law. “If voters in [santuary city] Chicago are concerned about losing federal grant money: call your mayor,” Sessions told Chicagoans in his prepared remarks.

5. Others are resisting in the courts, and some liberal judges are using doctrines the left has fought against for decades to help them.

After decades of many liberal judges insisting that the Tenth Amendment was a “truism” and federalism offered basically no restriction on federal power, Obama-nominee Judge William Orrick III decided Trump and Sessions trying to take federal grants, many of which specify they are not to go to jurisdictions that violate 8 USC § 1373, from sanctuary cities, is over the line.

Perhaps most disturbingly, his ruling suggests even Congress simply does not have the power to suspend funding from sanctuary cities under the rarely used and oft-maligned by liberals “commandeering” doctrine.

6. Things are far from over in the courts.

DOJ vowing to appeal the San Francisco decision as far it needs to go, with a spokesman saying, “The District Court exceeded its authority today when it barred the President from instructing his cabinet members to enforce existing law. The Justice Department will vindicate the President’s lawful authority to direct the executive branch.”

The cases in Chicago and Philadelphia are also far from a final resolution and only preliminary orders have been issued. All may eventually wind up in the Supreme Court, whose rulings on these type of federalism issues is rather thin as things stand today.

7. Backup is coming from Congress and red-state legislators.

GOP immigration hawk in Congress have not been content to merely sit on the sidelines on sanctuary cities. Reps. like John Culberson (R-TX), Steve King (R-IA),Paul Gosar (R-AZ), Mo Brooks (R-AL), and Ken Buck (R-CO) have praised Sessions efforts to rein in sanctuary cities and worked to create a plan to back him up with legislation.

At the state level, Texas is fighting its own legal battle to keep in place a popular law banning sanctuary cities there. Mississippi has already passed similar legislation and Kansas, where Secretary of State Kris Kobach is running for Governor on an anti-sanctuary platform, is well on its way to doing so. Other states are considering doing the same.