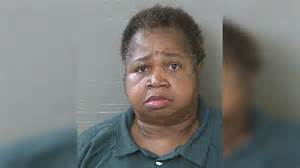 On Saturday, a 9-year-old girl who was barely three feet tall and weighed 74 pounds died from a heart attack after her 320-pound cousin punished the girl by sitting on top of her until she couldn’t breathe.

Veronica Posey, 64, of Pensacola, Florida, told police that she punished her cousin, Dericka Lindsay, for misbehaving by sitting on her. Dericka complained that she couldn’t breathe with her aunt on top of her, but by the time Posey got off of her cousin, the girl was unconscious, according to an arrest report from the Escambia County Sheriff’s Office.

Dericka’s mother, Grace Smith, 69, told investigators she couldn’t handle Dericka, so she called Posey, her niece, to discipline the girl.

The Pensacola News Journal reported that Dericka ran toward an armchair after Posey struck her with a ruler and a metal pipe. Her father, James Smith, 62, said Posey sat on Dericka for 10 minutes before Dericka complained she couldn’t breathe. Dericka died less than an hour later at a hospital.

Posey has been charged with second-degree murder and aggravated abuse. The Smiths were charged with child neglect.