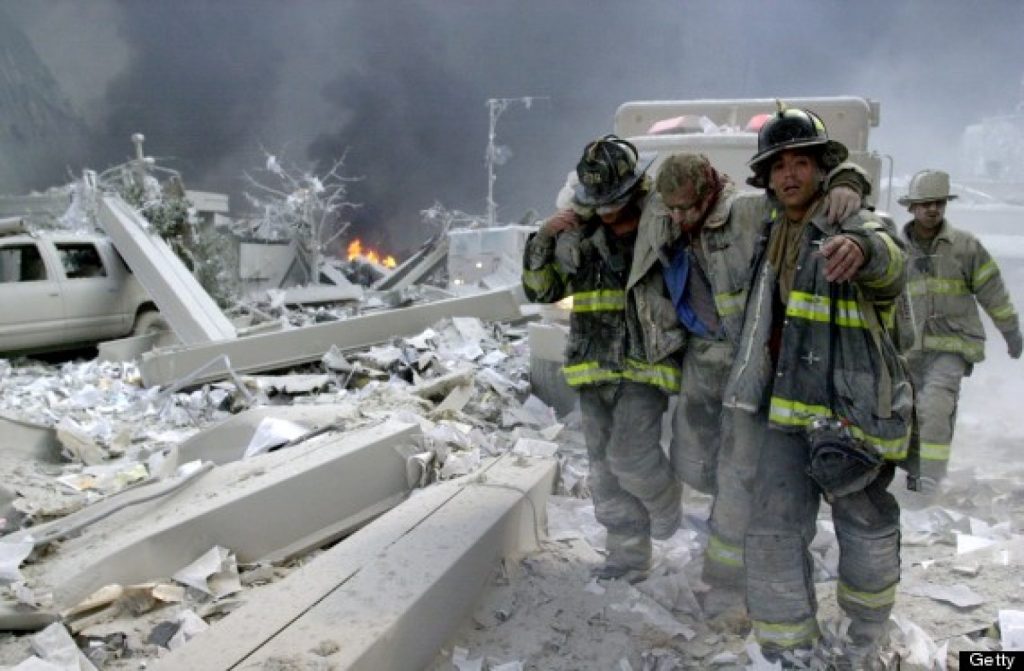 In the weeks following 9/11, American flags flew on every corner. Athletes and fans couldn’t manage to hold back tears as they stood proudly for the national anthem before game time. Volunteers nationwide gave a helping hand to our courageous first responders, still searching for survivors, and clearing the still smoking rubble from the blood-soaked streets. You couldn’t go anywhere without seeing someone wearing a FDNY or NYPD hat out of respect for our heroes.

We were fearful and we were sorrowful, but mostly, we were united, by our American identity. We made a vow to those we lost that we would “Never Forget.”

Flash forward 16 years and it’s as if we’ve entered the Twilight Zone. Not only have we forgotten that which we promised we would not, but the national pride which once unified us has been replaced by an endless stream of anti-American propaganda.

The American flags we flew with such pride are now considered a “hate symbol” on college campuses. NFL Quarterback Colin Kaepernick is portrayed as a hero for kneeling during the national anthem, and wearing socks to practice that depict police officers as pigs. Celebrities including Madonna, George Lopez, Snoop Dogg, and Kathy Griffin go remarkably unchallenged by their fans in the mainstream media after wishing death to our President.

Even more appalling, a sitting Missouri State Senator Maria Chappelle-Nadal, who encouraged the assassination of President Trump remains in office, with a complete media blackout.

Late night talk shows have been transformed from comedic entertainment into leftist propaganda outlets, with Stephen Colbert leading the charge. Colbert has made some of the most vile commentary about our Commander-in-Chief, including an explicit, and homophobic attack, which predictably went unpunished by the leftist network he works for.

Even after radical Islamic terrorists killed over 3,000 American civilians in the largest terrorist attack in world history, merely suspending travel from terror-ridden nations is met with disgraceful backlash and baseless accusations of “islamophobia.” Sharia law, which legitimizes honor killing, female genital mutilation, and the stoning of homosexuals, amongst other barbaric acts, is now portrayed as a human rights issue across the West, by those who predictably endorse anything that is contrary to the Western values they oppose.

Animosity for America in the media dramatically metastasized during the Iraq War, when pretend journalists like Matt Lauer were more concerned with criticizing interrogation tactics on terrorists than actually defeating terrorism.

Still, at least during the Iraq War there were intellectually honest individuals in the mainstream press, such as the late Christopher Hitchens, who were willing to call out this masochistic poison for what it was. Once, responding to the idea that Islamic Jihadists were merely a movement of self-defense against American foreign policy, Hitchens brilliantly articulated…

“Don’t you tell me that a movement that wants to stone Amina Lawal, the Nigerian woman who was supposedly provenly adulterous because she was holding a baby in her arms without a husband is doing that because they want to help the Palestinians. Don’t make me laugh!”

Hitchens has tragically passed since then, and along with it, his unapologetic condemnation of our radical Islamic adversaries from those on the left. Instead, we’re stuck with ANTIFA thugs who seek to silence voices like Hitchens through violence.

Recently my organization, ACT for America had to cancel 67 rallies planned across the country to honor the memory of the victims of 9/11, and stand for policies that will diminish the ability of terrorists to bring their evil to our shores.

The cancellation of these events was not caused by Islamic terrorists, but from the radical American left pledging to “mow down” our people. These threats were no doubt inspired by the hateful leftist group the Southern Poverty Law Center, which deals not in poverty, but in smearing anyone who opposed their politically liberal worldview, which their deep pocket donors require.

But we can’t stay silent. There’s simply too much at stake.

Instead of an on-site rally leaving innocent American as sitting ducks for violent attacks, ACT for America will host a live online Day of Action for America.

Myself, along with other prominent National Security leaders will be educating and mobilizing patriots all across America about how we can push back effectively against the threats we face.

Go to actforamerica.org/live from 12pm – 3pm EST on Saturday, September 9th to join this much-needed event.

We must show our enemies that we will not be silenced.

We must let our elected officials know that if they refuse to do what is necessary to protect Americans, we will overwhelmingly vote them out of office.

We cannot afford another 9/11 in the name of political correctness, and we can never forget that which we promised we would not.