A Party of Racists–
A week ago Virginia Governor Ralph Northam was caught in blackface-KKK in a college yearbook. 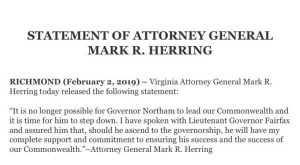 And TODAY admitted that he too wore blackface!

Virginia Attorney General Mark Herring admitted he wore blackface at a college party in 1980, throwing even more chaos into an executive branch whose two top officials are under fire for separate scandals, one involving racism, the other involving alleged sexual assault.

Herring, a Democrat, is third in line to the governor’s office.