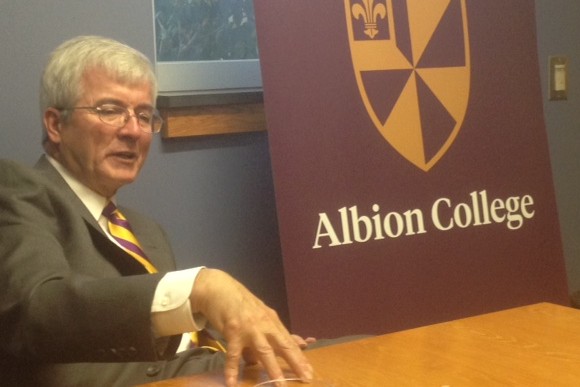 A private college president allegedly told a student government meeting that a young woman’s assault at the hands of campus protesters was justified on the grounds that the victim had “privilege.” The president, meanwhile, denies that he made such a claim.

A student who attended the Sept. 25 meeting relayed the alleged remarks by Albion College President Mauri Ditzler to The College Fix Wednesday night, saying the president’s comments “had everyone in the room shocked.” The young woman who was attacked also tweeted the same allegations.

The student senate meeting followed a campus demonstration against “racism and hate” last month, which itself stemmed from a document within a College Republicans email to members that contained political talking points but also a jocular message about “hunting” progressive activists.

Protesters also issued a set of demands for the college that include mandatory diversity training and gender-neutral housing.

Ditzler strongly denied that he had excused the “pushing” in an email to The College Fix, saying he had simply told the meeting that his “privilege” shaped how he saw the protest as he passed by it.

Protest kicked off by controversial email

The email by a “student leader” in the College Republicans instructed recipients in how to debate the topic of “white privilege,” MLive reported, ending with this advice:

Take the liberal tears from the idiot you just destroyed in your debate, dissemble your American made Springfield M1911 .45 caliber handgun and apply the tears in order to clean the mechanism, reassemble and proceed to purchase Antifa and ISIS hunting permits and max out on tags.

These satirical instructions prompted a demonstration by students from “black, Latino and LGBT-centered organizations” among others, MLive reported. The “on-campus demonstration against racism and hate” allegedly blocked the entrance to the campus dining hall.

“They blocked Baldwin, which is our dining area,” Michaela Olsen, then the secretary of Albion’s College Republicans, told MLive. “They wouldn’t allow me in to eat lunch, today.” (The club is widely referred to as “Republicans,” though its formal name is Albion College Conservatives.)

Reached via email, Olsen told The Fix that “Albion is quickly going downhill,” and that President Ditzler is “a one-sided man and there is no changing of him.”

Olsen claimed that, the same day of the protest, Ditzler had subsequently brushed off a physical assault that had taken place during the demonstration.

One student stood up and said to Ditzler that his girlfriend, who was sitting next to him, was physically shoved and verbally abused by the protesters during the protest. Ditzler’s response was that she had “privilege” and deserved what happened, because she needed to step into the protesters shoes and see how they live their everyday lives. …

Telling a young woman that she deserved what happened to her because she has white privilege had everyone in the room shocked.

A series of tweets by Witowski corroborates Olsen’s version of events: “[T]he president of my college told me I’m of privilege and it’s okay for me to be harassed verbally and physically…There was a protest at my school today and I was physically pushed during it…The president of my college said that it should be a learning experience for me because I am of white privilege…[H]e said this to my face.”

Presented with Olsen’s account of the meeting, President Ditzler told The Fix: “That is not my memory of the conversation. I do not believe your summary is an accurate reflection of my belief or my statement.”

At the meeting I affirmed the right of students to demonstrate peacefully. I acknowledged that I was aware of reports of heated exchanges and pushing between demonstrators and those passing by the demonstrations on their way to lunch. I called for investigation of those events which I described as mistakes and unfortunate.

I noted that peaceful demonstrations were designed to make us feel uncomfortable. Many of those demonstrating report feeling uncomfortable every day. Those made uncomfortable by the demonstration experienced that for a day. I went on to say that I was not uncomfortable walking past the protest, but my reaction was an example of how privilege (mine in this example) causes all of us to view events differently when we are in a privileged position.

At the Senate event, I was critical of non peaceful actions. During the demonstration itself I instructed members of my staff to take actions designed to maintain safety. After the demonstration I instructed College personnel to create and implement a policy that will allow swift action to remove from campus anyone threatening physical violence.

Reports of physical altercations may be accurate, reports that I endorsed those actions or that I said that they were deserved are false.

Reached by phone and presented with Ditzler’s statement, Olsen explicitly rejected Ditzler’s version of events, claiming the president did indeed tell a young woman that her assault was justified. Ditzler’s comments at that meeting were so troubling to Olsen, she told The Fix, that she withdrew from Albion the day after the senate meeting.

Witowski affirmed Olsen’s account of the meeting and disputed Ditzler’s in an email to The Fix, claiming that Ditzler did not actually refer to himself as privileged. Witowski told The Fix that Ditzler “encouraged the students to make us feel uncomfortable so that we know how they feel.”

“After he was done with his statement,” Witowski told The Fix, “the room got very loud and you could tell that there was a lot of shock at what was just said.”

The Fix attempted to contact members of the Albion Student Senate, including faculty and staff representatives on the senate, but none responded.