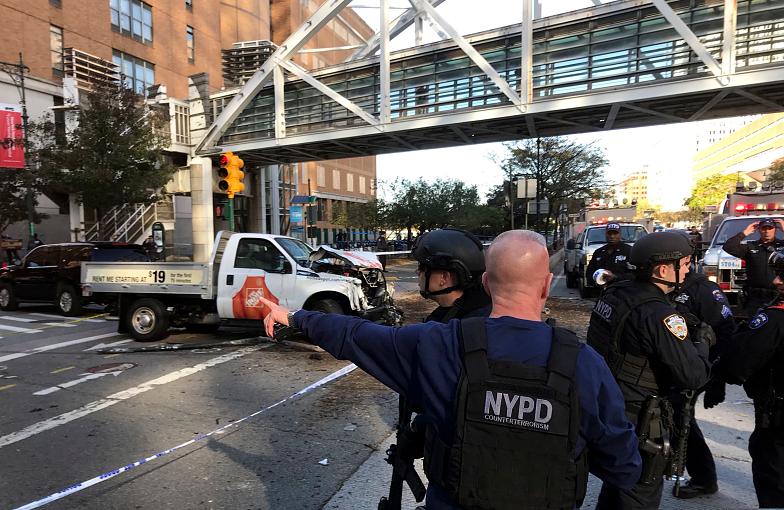 Fox News’s Neil Cavuto confirmed Tuesday afternoon that the man who drove a box truck into a crowd of people on Manhattan’s Lower East Side yelled “Allahu Akbar” — or “God is great” in Arabic — as he exited the vehicle.

The suspect, who has not been named, is in custody. Authorities say the man drove a rental truck onto a bike path not far from the World Trade Center. The man mowed down cyclists before jumping from the car, screaming, and firing what appeared to be a gun.

Authorities say it may have been a BB or paintball gun.

FBI officials told Fox News that they have agents on the ground working alongside the New York Police Department. A bomb squad was called in to handle reports of a “suspicious vehicle.”

Both President Donald Trump and New York City Mayor Bill de Blasio have been briefed on what authorities now suspect is a terrorist attack.

Initially, media were reporting that the single attack was actually two separate incidents: one of a truck mowing down pedestrians, and one of shots fired. But as the story began to develop, rumors circulated that the suspect, who witnesses describe as thin and tall and dressed in a blue tracksuit, shouted in Arabic as he jumped out of the truck.

Around 5 p.m. EST, authorities confirmed to Fox News, the Associated Press, and NBC News that the man did, indeed, shout “Allah Akbar” right as he confronted police, changing a simple law enforcement incident into a “full blown terror investigation,” as described by NBC.