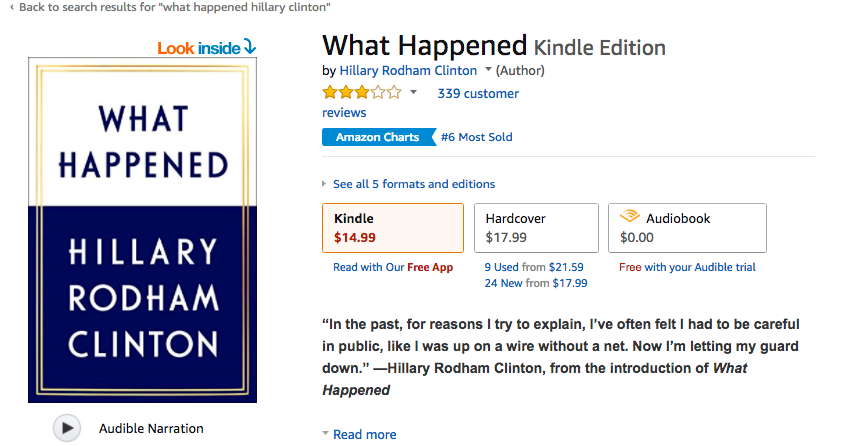 Amazon can’t just sell books, it has to alter how people feel about them. Via Yahoo, we saw the London Telegraph reported that “Amazon has been monitoring and deleting reviews after Hillary Clinton’s new book was greeted with a torrent of criticism on the day it was released.”

The result? As of Thursday night, fully 94 percent of Amazon’s 655 Hillary book reviewers have awarded the book 5 stars….and only 3 percent have disapproved with a one-star review. Guess who hasn’t reported on this website manipulation so far? The Amazon-owned Washington Post.

Few of the one-star reviews remain on the website, but reports and screengrabs show that reviewers used the space to criticise the former First Lady and spread conspiracy theories about her and Bill Clinton.

One one-star review, which remains on the website at the time of writing, reads: “Read all the promotional excerpts, which combined come close to book length – pretty good novel. It is fiction, isn’t it? Surely, someone is playing a joke.”

Amazon is rarely moved to delete reviews so publicly, although in November negative comments under a book by anti-Trump broadcaster Megyn Kelly appeared to be removed by the retailer.

It might seem obvious that not every reviewer has read the book, but it just offering an opinion on the author. But this isn’t just true for the one-star reviews. It’s just as obvious that Hillary die-hards would hit the 5-star button without reading it. A naive shopper may think this book is bowling over readers…instead of realizing this might be a very political campaign.

What about a more traditional book? See the page for Shattered: Inside Hillary Clinton’s Doomed Campaign by two liberal reporters — 38 percent 5-star reviews, and 16 percent one-stars. That means 46 percent are in between.

Here’s what Amazon said in response:

Speaking to Fortune, a spokesperson from the company said: “In the case of a memoir, the subject of the book is the author and their views. It’s not our role to decide what a customer would view as helpful or unhelpful in making their decision. We do however have mechanisms in place to ensure that the voices of many do not drown out the voices of a few and we remove customer reviews that violate our community guidelines.”

Unless making negative comments about Clinton constitutes “political campaigning” I don’t see anything here which would disqualify a negative review absent any obscenity. Amazon also goes out of their way to say that they don’t “regularly review posted content.” Really? Somebody seems to have been working overtime to review the comments about Clinton’s book so this is being treated as a special case.

PS: Here’s one more little pointer about the Washington Post. The Hillary book page carries this blurb from the Post:

“What Happened is a raw and bracing book, a guide to our political arena.”
—The Washington Post

But still, Clinton cannot let that Comey moment go. She quotes Fox News clips, legal analysis and congressional testimony to conclude that she was wronged. She takes subtle pleasure in Comey being fired by President Trump six months later. She apologizes to the reader, who has to relive all of this. “It wasn’t healthy or productive,” she writes, “to dwell on the ways I felt I’d been shivved.”

It’s a perfect word, “shivved.” The Hillary Clinton of this bitter memoir resembles the shrunken, beaten Richard Nixon who told David Frost that he gave his enemies a sword and “they twisted it with relish.” Again and again she blames herself for losing, apologizing for her “dumb” email management, for giving paid speeches to banks, for saying she would put coal miners “out of business.” She veers between regret and righteous anger, sometimes in the same paragraph.