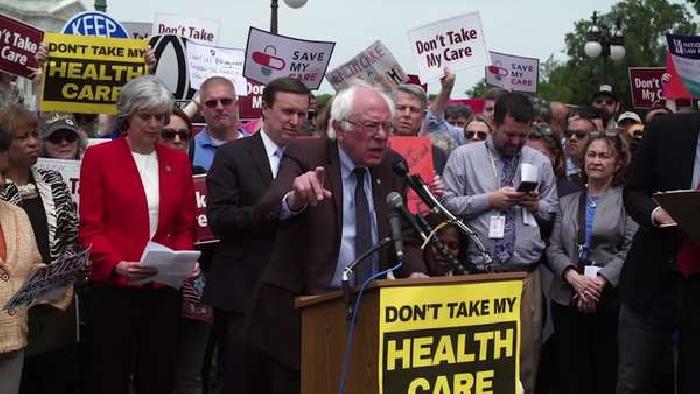 Democrats on Capitol Hill are marching in lockstep opposition to the GOP healthcare bill’s proposed changes and reforms to Medicaid, with a number of Republicans signaling cold feet on the issue, as well.  We’re told that curbing the massive entitlement program in virtually any way would be “mean,” and would “kill” thousands of people (here’s an interesting counterpoint to the latter demagogic assertion).  Those who insist on protecting the post-Obamacare Medicaid status quo often do so on the grounds of compassion and caring, but is that a defensible posture?  Those lawmakers should be forced to answer serious questions that aren’t premised on the insidious statist assumption that more money automatically or magically equals better outcomes:

(1) Before Obamacare massively expanded Medicaid, that hugely expensive program was already struggling, to put it kindly.  Many doctors across the country were not accepting new Medicaid patients due to low government reimbursement rates, fueling systemic access problem.  More importantly, a gold-plated study co-authored by none other than Jonathan Gruber, which examined evidence out of the liberal state of Oregon, concluded that low-income and vulnerable Americans who were on Medicaid did not experience statistically superior health outcomes than their uninsured peers.  Read that sentence again.  Even if you’d prefer to ignore that landmark research and cling to other studies showing more mixed results, how is it compassionate or morally right to funnel millions of new people into a model that was — at the very least — deeply flawed, if not outright failing?

(2) Medicaid was initially designed for the truly indigent, pregnant women, children and the disabled.  The Medicaid expansion population is by definition less poor, and is disproportionately comprised of able-bodied childless adults.  Nevertheless, in order to incentivize states to participate in the expansion, Obamacare allocates a more generous federal funding formula for the latter group.  Part of the GOP plan is to equalize treatment of the two populations by slowly phasing out the expansion model.  Beyond stretching resources even thinner for the neediest recipients, how on earth is it fair for Washington to subsidize empirically less needy and less vulnerable people more generously than the people for whom the entire program was launched in the first place?

(3) Growth in Medicaid spending has far outpaced general inflation, and is on a mathematically unsustainable path.  “In 1970, Medicaid spending was 1.4 percent of federal spending. In 1980, it was 2.4 percent. In 1990, 3.3 percent. By 2000, it had doubled to 6.6 percent. In 2010, it was 7.9 percent. In 2017, it will be 9.8 percent,” writes George Will.  As we’ve seen in states like California, the explosion of Medicaid has blown giant holes in budget projections, and has harmed consumers seeking care.  How is it “caring,” let alone fiscally responsible, to dig in on a system that simply cannot continue on its existing trajectory?  To Democrats who are fanatically opposed to the Republican plan to shift Medicaid from an untenable, mushrooming open-ended entitlement to a state-by-state per capita cap system, I’ll let Mr. Will pose a straightforward question:

In 1995, all 46 Democratic senators expressed to President Bill Clinton “strong support for the Medicaid per-capita cap structure.” Three of those 46 are still senators — Vermont’s Patrick Leahy, California’s Dianne Feinstein, and Washington’s Patty Murray. What about Medicaid’s trajectory since then has changed to justify them changing their minds?

To the Republicans who seem addicted to Medicaid expansion dollars, including Sen. Susan Collins (who doesn’t even represent an expansion state), if you’re unwilling to make modest reforms to a ballooning entitlement program in the very earliest stages of its unwise expansion, why should we ever trust that you’ll have the clarity and fortitude to lead on averting our nation’s looming debt crisis? If you can’t countenance reasonable, gradual changes to Medicaid, why should we believe that you’d take tough but necessary votes to save Medicare and Social Security through vital reforms? Why should we ever trust you as someone who has the slightest interest in limiting the size and scope of government — which is supposedly the unifying tent pole of your party?

(4) Medicaid expansion enthusiasts confidently predicted that plowing millions into coverage through that program would reduce the problem of expensive emergency room visits from uninsured patients (many leading to costly incidents of “uncompensated care,” which ultimately impact all consumers).  Although this theory made intuitive sense on some level, it has proven to be quite wrong.  Emergency room visits have increased substantially since the implementation of Obamacare, likely due to newly “covered” Medicaid patients being unable to see primary care doctors, and flocking to hospitals, now armed with an insurance card.  In light of a laundry list of dishonest promises and bad predictions, why should we believe much of anything pro-Obamacare forces have to say about a bill to replace the mess they’ve made?

(5) The Senate Republican healthcare plan, which is still a bit of a moving target, would very modestly reduce federal Medicaid outlays over the next decade, compared to existing (but not yet executed) Obamacare-mandated law:

Remember, when liberal media goes hysterical about about Medicaid per-capita caps: over 10 years they reduce Medicaid spending by 1% ($65B). pic.twitter.com/BBllESt7c1

Overall, remember, Medicaid spending would still increase — by tens of billions — over that time horizon.  The federal government will spend $393 billion on the program this year (please review the numbers from point three again, to put that in proper historical context).  Under the “draconian” GOP bill, that number would rise to $466 billion by 2026.  Those numbers come from CBO, via left-leaning Politifact.  Yes, that rise is less steep than it would be under Obamacare, but it’s still a rise.  Without using Beltway speak, please explain how it is remotely sensible or fair to describe that slightly lower spending increase as a “deep spending cut.”

Before you go, read this Forbes piece recalling how supporters insisted that Obamacare’s Medicare “cuts” weren’t technically cuts and would have negligible impact.  These same people are now referring to reduced spending increases as sky-is-falling spending cuts.  I’ll leave you with this:

Important WSJ editorial on state-level Medicaid innovations that save billions w/o hurting eligibility or services: https://t.co/meYeo3gVIS