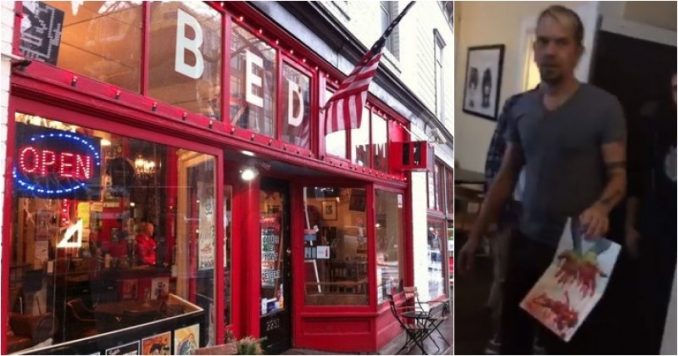 A gay Seattle coffee shop owner kicked a group of Christians out of his coffee shop Sunday, after declaring he would “f*ck Christ in the ass.”

The owner heatedly tells the Christians to leave his shop immediately in a video posted to Facebook by Abolish Human Abortion, a Christian group seeking to end the practice of abortion.

“I’m gay, you have to leave,” the owner tells the group. “This is offensive to me. I own the place. I have the right to be offended.”

The group tried to explain that they hadn’t placed any in the shop, but the owner repeatedly told them to”shut up.”

“There’s nothing you can say. This is you and I don’t want these people in this place,” the owner says. The group asks why he can’t tolerate their presence, prompting the owner to ask them if they would watch him have sex with his boyfriend.

The group gets up to leave, as one woman among them says, “just know that Christ can save you from that lifestyle.”

According to the Liberator, the Christian group had been handing out pamphlets to Seattle locals on abortion, sin and the Bible. The group entered Bedlam Coffee to take a break and drink coffee when a barista went upstairs to tell the owner that the group was there.