In the post, which mistakenly labels New Years as “January 31st,” they call for “free engagement” against who they consider “fascists” in areas of the city circled on a map. 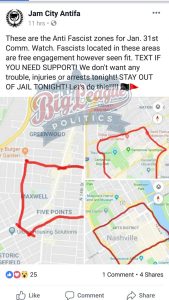 The driving force for these activities came from two fronts. First was a rumored meet-up of the conservative-leaning fraternal group Proud Boys, which Nashville-area Proud Boy Matthew Walter has confirmed to Big League Politics as non-existent.

Along with the non-existent Proud Boys meet-up, the Antifa group was targeting the city due to the presence of Fox News personality Tomi Lahren, who was broadcasting her show from a Nashville bar.