A recently unclassified report from the New Jersey state Department of Homeland Security shows that the agency lists Anarchist Extremists (Antifa) at the same threat level as the viciously violent terrorist organization ISIS. 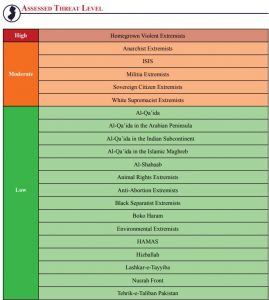 They are listed as a moderate threat, along with militia extremists, sovereign citizen extremists, and white supremacist extremists.

The only group seen as more dangerous is homegrown violent extremists.

In their assessment DHS does state that a majority of those who consider themselves “antifa” are not violent, but that they have a sizable enough number of those violent elements to be listed.

A number of violent events carried out by Antifa are listed, including a violent attack on a New York Republican club last year, and a violent racist attack against two Latino marines in Philadelphia.