A professor at the University of North Carolina – Chapel Hill and Antifa ringleader has been charged in the assault of Big League Politics editor-in-chief Patrick Howley according to an official report.

Dwayne Dixon, 46, of Durham was served a summons last week to appear before a judge on September 27.

A case detail form shows that Dixon has been charged and arraigned with Simple Assault.

Arrest report shows that Dixon is accused of assaulting Howley a 1 McCorkle Place, the location of the Silent Sam statue at UNC.

He will appear in Hillsborough District Court to answer for himself later this month. 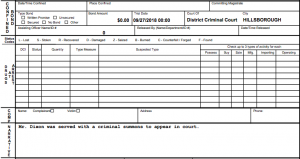 Dixon is a longtime ringleader of Antifa in the southeast, and has admitted to chasing James Fields with a rifle.