Failed Portland Mayor Ted Wheeler thought he’d join the Antifa-BLM mob on Wednesday night to show he’s down with the cause after DHS agents were deployed to protect the federal courthouse.

Mayor Wheeler, who is also the Police Commissioner, previously refused to meet with federal officials and lashed out at DHS Secretary Chad Wolf.

“A number of people have asked if I know DHS leadership is in town, and if I’m going to meet with them. We’re aware they’re here. We wish they weren’t. We haven’t been invited to meet with them, and if we were, we would decline,” Wheeler said in a July 16 tweet. 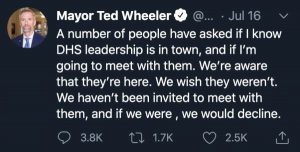 The Antifa mob this week cursed Wheeler and told him to resign.