Antifa in Berkeley has been stalking University of California – Berkeley College Republicans, listing them by name and alerting others to their physical whereabouts in real time.

On Wednesday, the Berkeley Antifa account on Twitter posted the private meeting place of several Berkeley College Republicans, whom they claimed had been “drinking with Kyle Chapman and Joey Gibson.”

Kyle Chapman, also known as “Based Stick Man,” is the Trump supporter who engaged in physical skirmishes against Antifa. He became Internet famous for hitting an Antifa supporter in the head in March. Joey Gibson is the founder of Patriot Prayer, a pro-Trump grassroots organization active in California and the Pacific Northwest. 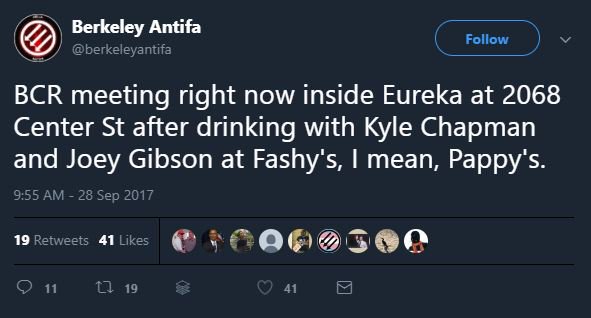 Unlike other Antifa accounts on Twitter, the Berkeley Antifa account remains one of the “real” pro-Antifa accounts managed by members of the far-left, extremist movement based in the Southern California region. It has been known to incite violence against conservatives, free-speech advocates and anyone they deem to be “fascists.”

The aggressive, intimidating behavior is part of a continued campaign to stalk and target conservatives within and outside of the campus. The account named several Berkeley College Republicans, including Troy Worden, Ashton Whitty, Naweed Tahmas, Matt Ronnau, and Angelie Castenada.

The account did not call for violence against the conservatives, nor did it suggest taking any actions — but posting their whereabouts is clearly an attempt to intimidate the students.

This August, one of the students named by the Twitter account, Ashton Whitty, was tracked down by members of Antifa and cornered at a gas station, where they pummeled her vehicle. Whitty relayed the encounter to Fox News, which showed footage of the violent incident.

Whitty told Campus Reform that she has been stalked by Antifa, who have taken pictures of her and tracked down her location. “It’s rather odd why these people would see us as such a priority when we’re just everyday people,” she said.

Speaking to Campus Reform, Nahweed Tahmas, who is the VP of the Berkeley College Republicans, says that conservatives at UC Berkeley are “routinely targeted, harassed and stalked” by the anarchist group.

“Knowing that they have sympathizers within both the city administration and university administration, leftist groups will continue to target conservatives as they know there are no consequences to their actions,” he said.