The California Teachers Association is launching a campaign to “actualize the definition of social justice” by encouraging its 325,000 members to plaster leftist propaganda posters “in your school, classroom, and beyond to create welcoming environments and safe zones.” 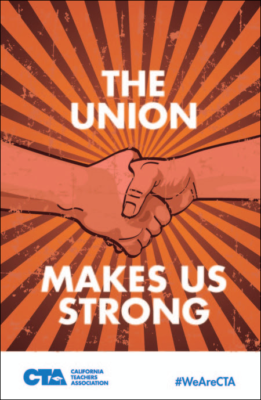 The posters, provided as part of the CTA’s “Social Justice Toolkit” for educators, profess union slogans and far-left political ideology as self-evident truths students are expected to absorb and adopt, while utilizing the style and imagery of communist propaganda flyers.

“Stand with me! Stand for … social justice for all,” one poster reads above a large raised fist.

“The union makes us strong,” according to another, which displays a handshake in front of an iconic rising sun background.

Many of the CTA posters are available in both Spanish and English and are decorated in rainbow colors.

“We believe:” one of the posters declares, “Black Lives Matter, women’s rights are human rights, no human is illegal, science is real, love is love, kindness is everything.” 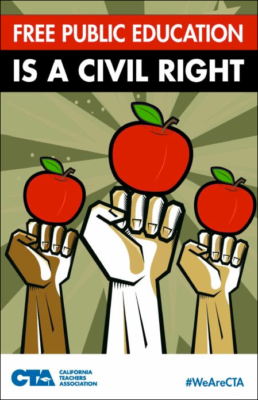 “Free public education is a civil right,” according to one poster with several clenched fists topped with apples, again with a rising sun background.

“This is a safe zone,” others read, “Bullying, harassment and racial slurs will not be tolerated.”

“Keep our public schools public,” yet another demands.

Throughout the toolkit, the CTA repeatedly advocates for policies that respect “#AllStudents,” though the California Policy Center points out that the union’s campaign itself alienates many families who don’t believe in its far-left ideology. 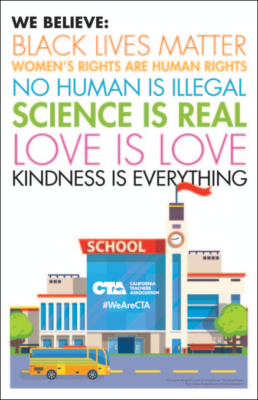 It’s also an insult to countless low-income and minority students shortchanged by a union monopoly on public education that continues to turn out graduates who can’t read their own degrees, the Center argues.

“For once, we at the California Policy Center agree with the CTA: Public education is a social justice issue. It is an injustice that California’s public education consistently ranks at or near the bottom of national lists. Because you know who suffers the most? The students living in low-income neighborhoods whose families have no choice but to send their kids to the local union-controlled school,” the Center wrote. “That is an injustice.”

“But of course, the CTA fails to see the true injustice. Instead, teachers union leaders and activists focus on leftist indoctrination tactics, including poster that look like they came straight out of a Soviet reeducation camp.”