In an interview with MSNBC’s Chris Hayes on Thursday, Beto O’Rourke made it clear that his opposition to a border wall doesn’t end at proposals for construction supported by President Trump. O’Rourke also supports removing existing fencing and barriers- that already exist on the border.

Such an approach places O’Rourke’s immigration policy closer to open borders than other prominent Democrats.

Texas Congressman Dan Crenshaw phrased the question to Beto on Twitter earlier this week, before the former El Paso Congressman held a rally protesting President Trump’s presence in the city. He pointed out the effectiveness of barriers on El Paso’s international border with Mexico. 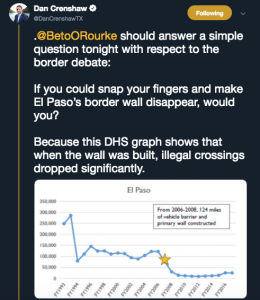 Beto gave an honest albeit extreme answer to Crenshaw’s question when being interviewed by the MSNBC personality right next to El Paso’s border. When asked if O’Rourke would take down the existing barriers, Beto responded with a curt and upfront “absolutely.”