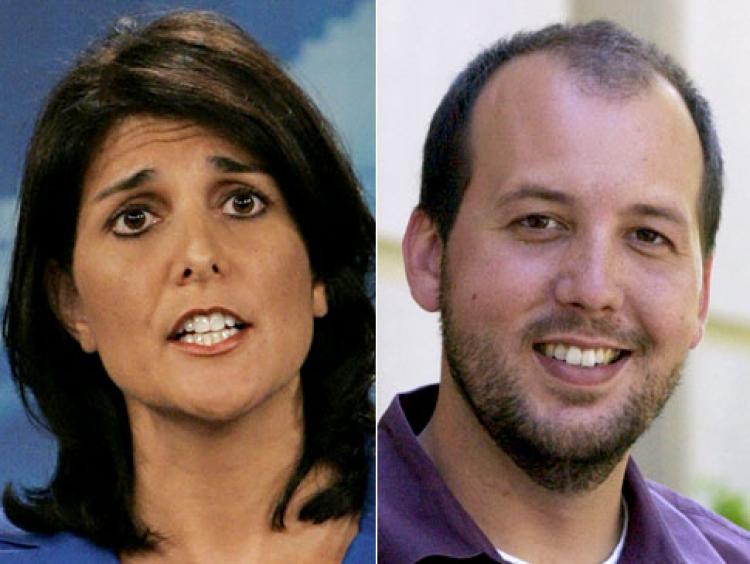 United Nations ambassador Nikki Haley is encouraging the allegations of sexual impropriety against President Donald Trump by a crew of accusers who first surfaced during the 2016 campaign.

Haley said on Face The Nation: “Well, I mean, you know, the same thing, women who accuse anyone should be heard. They should be heard, and they should be dealt with. And I think we heard from them prior to the election. And I think any woman who has felt violated or felt mistreated in any way, they have every right to speak up.”

The Nikki Haley primary challenge to Donald Trump in 2020 is going to be epic.

Haley, who removed the Confederate flag from the South Carolina State Capitol, was accused of engaging in an extramarital affair by a former South Carolina political operative and top blogger named Will Folks, who detailed key aspects of the alleged relationship to me in an article for Breitbart News.

Haley denies having an affair with Folks.

I reported for Breitbart News:

“It started right over there,” Folks told Breitbart News of the alleged affair, pointing to the State Capitol a block away from the downtown restaurant where we met for the interview.

Folks first publicly admitted to the alleged affair in 2010 during the South Carolina gubernatorial race, when he was supporting Haley…

…These days, Folks—the man who made the allegations of an affair with Haley—is married with five children and runs one of the state’s go-to political websites on the Right. He says he is not bitter at Haley for any personal reasons, but is disappointed in her for her political 180-degree turn.

“She said she barely knew me. I was on her payroll for a year! I got her on the statewide stage,” Folks said of Haley’s denial of the affair. Folks said that he made an affidavit under oath confirming the affair, and that he stands by it.

“I did care for her but by the time it ended I had moved on and gotten very serious with the woman who is now my wife,” Folks said. “The governor is a stage 5 clinger to be honest. There were a few Wedding Crashers-type moments there.”

“I was taking a shower in mid-2009 and [my now-wife] came in with my cell phone and said, ‘You just got a message from Nikki Haley that was inappropriate. I deleted it and responded on your behalf.’ She shut that down pretty fast,” Folks said. Haley was a state legislator when Folks said the alleged affair began.

“It was the worst kept secret in that [Capitol] building,” he said. “Nikki would park her car at all hours of the night outside my townhouse,” visible to state senators driving past on their way to their hotel. “It was not long before people caught on.”

“The Rubio guys knew all about it,” Folks added. “The Henry McMaster guys. They were spreading it. They were all talking about it.”

“For whatever reason it went the way it went and I was the villain, which is fine,” Folks said. “At the time, I was aggressively promoting her candidacy. I was under the assumption that she was what she said she was.”

“I only met the husband once or twice,” Folks said. “Any time I asked about him, she said their relationship was perfect and they had a wonderful marriage and were very attracted to each other. I said, ‘Then what the Hell are you doing here?’ She never had an answer for that.”

One time, Folks said, Haley took him out to lunch with her children.

“She took me to lunch once with her kids at the Mellow Mushroom. I don’t know what she was thinking there. Maybe she was auditioning me,” Folks said.

When Folks came forward and admitted to the alleged affair, he said he coordinated with Haley on phrasing things in a way that would not doom her political career—and that would allow her to deny it.

“We agreed that I was going to publish something that would give her the widest avenue of deniability,” Folks said. “We agreed on the language I would use. The term was ‘inappropriate physical relationship.’ We worked together on that specific language.”

Folks said that the alleged affair probably will not hurt Haley as much on the national level as her financial history.

“Eventually at the national level these things are going to be vetted. What’s going to hurt her nationally was in 2006, she and her husband were pretty much flat broke” and then within a year she had many expensive possessions, including fine jewelry and a new house. “I don’t know where that money came from.

In particular, he said Haley’s decision to remove the Confederate flag from the South Carolina statehouse was a decision made by her corporate masters.

“The flag thing was because Boeing, Volvo, Michelin, and other corporate cronies told her what to do,” Folks said. “Volvo said they weren’t going to re-locate here unless she took down the flag. It was all decided in an office three blocks away from here, the South Carolina Manufacturers.”

The Rubio campaign did not provide comment for this report. Haley’s team also did not reply to requests for comment.