Laura Loomer along with other activists were arrested after jumping over the California Governor’s Mansion wall donning ponchos and sombreros.

The California police showed up to the property and handcuffed Loomer and the other activist who was wearing a fake mustache. 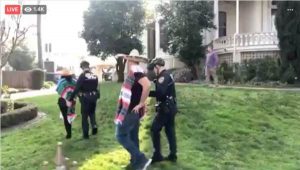 “Gavin Newsom, the Governor of California said everybody is welcome here and now the police and the armed guards are telling us that we are trespassing, but I thought that California was an open borders state,” Loomer said.

Loomer added, “Gavin has a fence — they have officers here. They are telling us we’re trespassing…I’m so confused!”