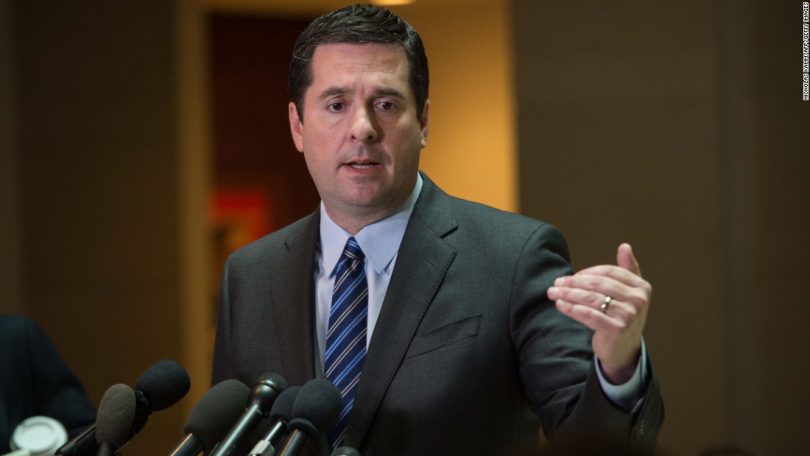 The long-awaited memorandum developed by the House Permanent Select Committee on Intelligence documenting abuses by the FBI during the last presidential campaign was released today over the objections of Capitol Hill Democrats and FBI Director Christopher A. Wray.

The memo was championed by Rep. Devin G. Nunes (R.-Calif.), the chairman of the House intel committee.

“The Committee has discovered serious violations of the public trust, and the American people have a right to know when officials in crucial institutions are abusing their authority for political purposes,” Nunes said upon the release of the memo by President Donald J. Trump.

“Our intelligence and law enforcement agencies exist to defend the American people, not to be exploited to target one group on behalf of another,” he said. “It is my hope that the Committee’s actions will shine a light on this alarming series of events so we can make reforms that allow the American people to have full faith and confidence in their governing institutions.”

Among its other charges, the memo shows how Fusion GPS passed the dossier to the FBI, which is part of the Justice Department, and the FBI then presented the dossier to a FISA judge, who granted the warrant to surveil members of the Trump campaign.

Fusion GPS is the Washington-based opposition research company, hired by the Clinton campaign and the Democratic National Committee, that contracted with Christopher Steele, a veteran of British intelligence service, to complete the so-called “Steele Dossier.”

According to the memo, Steele was paid $160,000 by Clinton campaign and the DNC through the Democratic-aligned law firm Perkins Coie.

The memo points out that Deputy Attorney General Andrew G. McCabe testified before the House intel committee in December that no surveillance warrant would have been sought without the support of the Steele Dossier.

In another section of the memo, Steele is quoted telling Ohr he: “was desperate that Donald Trump not get elected and was passionate about him not being president.”

Ohr noted Steele’s hostility to Trump, but it was never brought to the attention of the FISA courts, when the FBI was requesting surveillance warrants based on Steele’s assertions.

Virtually all but the most mundane assertions made in the dossier have been knocked down as false, but without vetting the dossier, the FBI presented it to a judge as if it was the FBI’s work product.

Comey himself referred to the dossier as “salacious and unverified” when he testified to Congress in June.

At the center of the surveillance is Trump campaign foreign policy volunteer Carter W. Page. Page is a 1993 graduate of U.S. Naval Academy at Annapolis, Maryland and a former senior national security aide to Sen. Daniel Patrick Moynihan (D.-N.Y.), focused on the helping the senator make the case to abolish the CIA.

In a party-line vote Jan. 29, the intel committee voted to make the four-page memorandum public, but committee rules give the president five days to object.

“It is just a disgrace,” said Trump about the behavior of the FBI. “People ought to be ashamed of themselves,” soon after he approved the release.

It was also Trump, who told congressman as he was leaving the House chamber after his first State of the Union address, he was “100 percent” going to approve the memo’s release.

The memo has to be understood on two levels.

On one level, there is the unseemly interaction between the FBI and the political operations of Hillary R. Clinton, such that Special Counsel Robert S. Mueller III fired his No. 2 man, senior FBI agent Peter Strzok, after Mueller became aware of politically partisan texts Strzok exchanged with his mistress Justice Department lawyer Lisa Page–who also left Mueller’s team.

After leaving public service, Page has functioned as a banker and consultant in the Eurasian energy markets, as well as, developing myriad academic relationships in Europe and Russia.

One another level, Congress and the president are trying to rein in the FBI, which has for decades operated as an independent agency.

While Democrats tried to suppress the memo because it confirmed that President Barack Obama’s administration had exploited the Foreign Intelligence Surveillance Act to monitor members of the Trump campaign.

Supporters of the FBI as an institution fought the memo’s release because it brought the bureau back under the oversight of Congress that it had largely shirked off for much of its existence.

The FBI posted a statement on its national public affairs webpage Wednesday that could be seen a rebuke to the president and Congress:

The FBI takes seriously its obligations to the FISA Court and its compliance with procedures overseen by career professionals in the Department of Justice and the FBI. We are committed to working with the appropriate oversight entities to ensure the continuing integrity of the FISA process.

With regard to the House Intelligence Committee’s memorandum, the FBI was provided a limited opportunity to review this memo the day before the committee voted to release it. As expressed during our initial review, we have grave concerns about material omissions of fact that fundamentally impact the memo’s accuracy.

Before the release, Wray pleaded with the White House not to approve, then realizing it was a forgone, he asked for names to be redacted. The redaction of names was a particular sore spot for Capitol Hill Republicans, who have watched for the last 18 months how the FBI and other intelligence agencies leaked names of Americans associated with Trump’s political campaign, businesses and family and other collection products to the new media.