Former CBS Reporter Sharyl Attkisson announced yesterday that she is suing former Deputy Attorney General Rod Rosenstein for illegally spying on her during the Obama year.  Rosenstein and other Deep State dirty cops are identified in her filing. 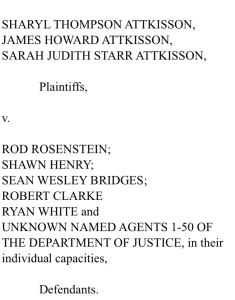 A former U.S. government agent has admitted participating in the illegal government surveillance on then-CBS New investigative reporter Sharyl Attkisson. The insider has identified former U.S. Attorney Rod Rosenstein as the person responsible for the project.

As a result of the new admission, Attkisson and her family are filing suit against Rosenstein and four other men allegedly involved. According to the lawsuit, the illegal surveillance was conducted against Attkisson and other U.S. citizens […]