Following the death of Commander Soleimani Democrat Senator Chris Murphy (D-Conn.) lashed out at President Trump for assassinating the Iranian al-Quds terrorist leader who was responsible for the deaths and maiming of HUNDREDS of US soldiers. 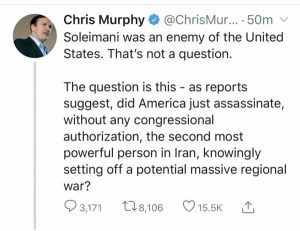 It soon became apparent why Murphy was sooo upset with Soleimani’s death.

Senator Murphy has a history of supporting Iran’s mullahs.
Murphy is a routine speaker at the NIAC Council, the regime’s lobby house in the US.