CBS excluded the Sept. 11, 2001 terrorist attacks from a statistic on the number of terrorism “incidents” in the U.S. during an interview Monday with Attorney General Jeff Sessions on “CBS This Morning.”

A total of 2,977 people were killed in the 9/11 terror attacks carried out by al Qaeda.

The graphic appears at the 2:53 mark in the video.

CBS anchor Norah O’Donnell asked Sessions what the Justice Department needs to do since attacks by far-right extremists have been more frequent.

“This is believed to be the largest white supremacy demonstration in over a decade,” O’Donnell said, referring to the violence perpetrated by white supremacists in Charlottesville, Va. over the weekend. “We went and looked at the data, and in fact, between 2001 and 2016, there were nearly three times as many attacks by right-wing extremists than Islamic extremists in the U.S. What does the Justice Department need to be doing?

Sessions said the Justice Department is focused on domestic terrorism and will continue to make it a high priority.

“The Justice Department is focused on that. I’m briefed three times a week by the FBI on terrorism and terrorism related issues,” Sessions said. “That includes briefings on domestic terrorism. And we will continue to focus on that. It will be a high priority of the Department of Justice.” 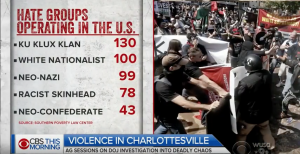 CBS was not the only network to omit the Sept. 11 terror attacks from its reporting.

MSNBC anchor Stephanie Ruhle did not include 9/11 on Monday when she claimed that right-wing extremists have killed three times more people than Islamic terrorists.

“Reverend Al [Sharpton], I want to start with you. Between 2001 and now, we have seen three times more deaths caused by right-wing extremists than Islamic terrorists,” Ruhle said.

Ruhle did not cite the source of her claim.

BuzzFeed also recently published an article on a report that left out a major Islamic terrorist attack.

BuzzFeed published a piece last week titled, “This Report Says More LGBT People Were Killed so Far in 2017 Than in All of 2016.” The report from the National Coalition of Anti-Violence Programs claimed there have been 33 hate-violence-related homicides targeting LGBT people so far in 2017, while there were 28 such hate-violence-related homicides in 2016.

The report left out the June 2016 Pulse Night Club shooting in Orlando, Fla, which took the lives of 49 people. There is no indication why the group left out the shooting, during which a man named Omar Mateen pledged allegiance to Islamic State leader Abu Bakr al-Baghdadi before opening fire on the gay nightclub.

BuzzFeed noted the absence of the Pulse shooting in the subhead.

“Advocates said the statistic — which doesn’t include the Pulse nightclub shooting — ‘should be a wake-up call.'”