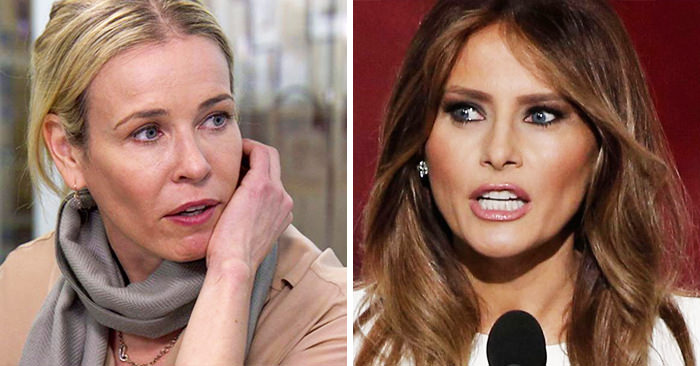 On Friday, (alleged) comedian and host Chelsea Handler took to Twitter to ridicule the Trump family with an unfunny, tasteless joke – a favorite pastime of the feminist.

This time, First Lady Melania Trump was in Handler’s crosshair: “Melania to host a discussion on opioid abuse. She says unless you have to have sex with Donald Trump, you have no excuse to be on drugs,” she wrote, referencing the first lady’s Friday forum on the opioid crisis.

Melania to host a discussion on opioid abuse. She says unless you have to have sex with Donald Trump, you have no excuse to be on drugs.

Handler, a self-described progressive, has previously hit Melania, a legal immigrant, for her English. “She can barely speak English!” the leftist mocked.

In March, Eric Trump’s unborn baby was the punchline: “I guess one of [Donald Trump’s] sons is expecting a new baby. Just what we need. Another person with those jeans [sic]. Let’s hope for a girl.”

She confused genes with jeans, but in her defense, it’s hard to tweet while intoxicated.

Ironically, Handler, who enjoys the luxury of the First Amendment and consistently rips the president and his family, is not so fond of such freedoms for others. Back in August, Handler advocated for a crack down on “people who think racism is funny.”

“2 Chinese guys were arrested in Berlin for making nazi salutes. Wouldn’t it be nice 2 have laws here for people who think racism is funny?” she wrote on Twitter.

Turning the Irony Meter up to 11, Handler herself has engaged in numerous racially-charged jokes. But, remember, there are one set of rules for the Hollywood elite, and another for us common folk.