Disgusting news broke yesterday: The Chinese Embassy in the United States proudly announced on Twitter that its sterilization policy for Uighur women in “residential communities” was actually liberating them by protecting them from the horror of being baby-making machines. It was an eerie echo of Barack Obama’s pronouncements about the necessity of early birth control as a way to protect his daughters from the punishment of a baby.

This is a real tweet from the Chinese embassy in the U.S. (As you read it, keep in mind that Twitter bans the United States president from its site, but not the Chinese Communist Party): 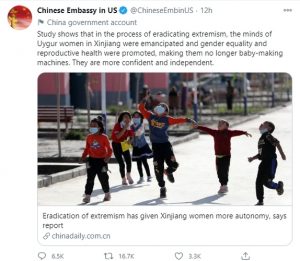