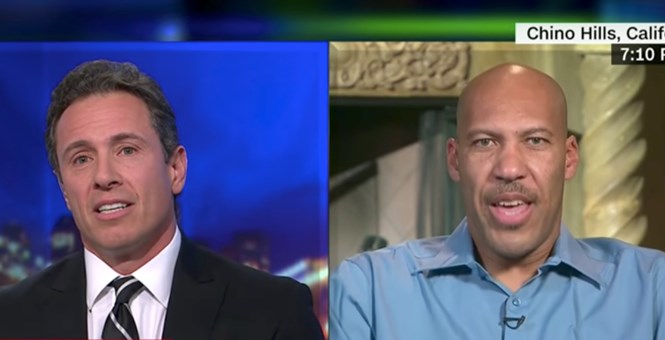 LaVar Ball is still refusing to thank President Trump for his role in bringing his son home to the United States. LiAngelo Ball was one of three UCLA basketball players to be taken prisoner in China after shoplifting. Trump reportedly helped secure the release of the three men earlier this month in talks with Chinese President Xi Jinping. Once he did, he tweeted his hope that the players would thank him.

At a press conference upon their return to the United States, LiAngelo, Jalen Hill and Cody Riley did just that, as well as apologize for their actions overseas. Yet, Mr. Ball sees no reason to give the president kudos for helping return his son to him. CNN’s Chris Cuomo confronted Ball for several awkward minutes Monday trying to get an answer.

“You know where my boy is at right now because of me. Because I spent all that time and love for him,” LaVar Ball said in an interview with CNN Monday evening. “Don’t come in one time and think you did something for my son.”

“I don’t have to go around saying thank you to everybody,” he added.

If he was going to thank anyone, he would “probably” thank Jinping.

Cuomo pressed Ball to reconsider, until the father finally revealed what would have convinced him to thank the president – if he had flown his son home on Air Force One.

Watch the whole bizarre interview below.