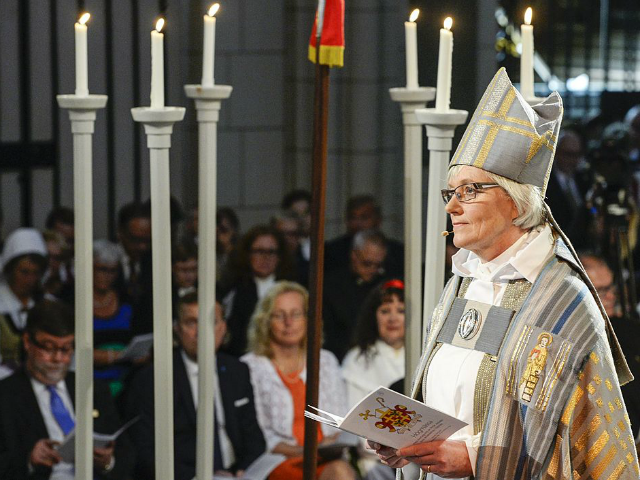 “We know that God is beyond our gender determinations.”

As feminism wormed its way across the cultural landscape in the 60’s and 70’s, Boston College professor Mary Daly spoke of her desire to castrate God. It looks like her vision has come to fruition in the Church of Sweden, where clergy have now been urged to use gender-neutral language in reference to God, advising them to avoid terms like “Lord,” “He,” and of course “Father.”

According to The Telegraph, “the move is one of several taken by the national Evangelical Lutheran church in updating a 31-year-old handbook setting out how services should be conducted in terms of language, liturgy, hymns and other aspects.”

The church’s 251-member council made the decision on Thursday after an eight-day meeting. The new rubrics will not take effect until after the Christian holiday of Pentecost.

The former state church, headquartered in Uppsala, which serves as home to 6.1 million baptized members, discussed gender-neutral language regarding God all the way back in 1986. Their leader, Archbishop Antje Jackelen, a woman, told Sweden’s TT news agency that theology demands God be referred to as some kind of eunuch.

“Theologically, for instance, we know that God is beyond our gender determinations, God is not human,” Jackelen said.

That could not be further from the truth. Throughout scripture, God continually refers to Himself as “Father” and presents Himself to humanity as masculine. Christ, who is also both man and God, called God the “Father” and ascended into heaven in a male body. For Catholics, the feminine aspects of the Church have always been represented in the Virgin Mary, whom they believe was crowned “Queen of Heaven,” and by the Church itself. Either way, God has never presented Himself as anything other than a masculine Father.

Christer Pahlmblad, an associate theology professor with Sweden’s Lund University, told Denmark’s Kristeligt Dagblad that the decision is “undermining the doctrine of the Trinity and the community with the other Christian churches.”

“It really isn’t smart if the Church of Sweden becomes known as a church that does not respect the common theology heritage,” he said.

Mainline protestant churches in the United States, Episcopalian most of all, have made similar steps to implement Mary Daly’s vision to castrate God.