Mississippi interim senator Cindy Hyde-Smith is coming under scrutiny for her refusal to commit to U.S. Senate debates in her race against conservative challenger Chris McDaniel and Democrat Mike Espy.

The local press can’t help but notice Hyde-Smith’s ducking of her opponents. Cartoonist Marshall Ramsey of the Clarion Ledger likens Hyde-Smith to a missing person on a milk carton: 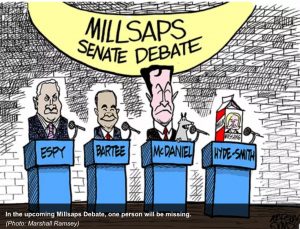 Indeed, many news outlets are noticing Hyde-Smith’s unwillingness to debate.

All three challengers are accepting two debate invitations for a U.S. Senate race in Mississippi, their campaigns said Wednesday. But it’s unclear if Republican incumbent Cindy Hyde-Smith will take part.

“It really is all going to depend on her schedule in D.C.,” Hyde-Smith campaign spokeswoman Melissa Scallan told The Associated Press.