The liberal media is licking at the chops to track down and harass the Manafort Mueller witch hunt jurors.

CNN wants the names and addresses of the Manafort jurors released to the public.

And apparently a judge will hold a hearing on their motion to release the names.

It will be a new form of thuggery by the fascist left — if you don’t give the results they want they will harass you and ruin your life. 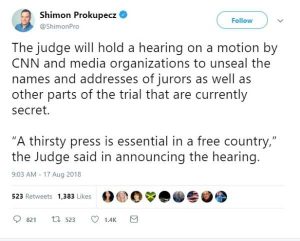 But, seriously, what could go wrong?

It’s not like CNN has a reputation of harassing seniors at their homes for posting pro-Trump events on Facebook.