Communist Antifa is beloved on the left and defended by both Democrats and the media. That’s because they share the same goals of revolution, chaos and a violent coup. Hell, they’re all communists.

This past week, at least five separate GOP offices were vandalized and attacked by these goons. Now, Antifa has stepped up their game by placing severed pig heads at multiple polling locations and campaign offices in the Austin, TX area. But you won’t hear about this. Instead, you will hear the left whine incessantly because Republicans have correctly labeled the left as having an angry mob mentality. They simply love mobs like Antifa, Democratic Socialists of America, the Communist Party USA, and all their minions bent on terrorizing those who do not share their violent Marxist views.

Red Guards of Austin just recently posted a blog post to their more than 8,000 Facebook followers where they commemorated Mao Zedong’s brutal communist revolution that resulted in millions of people being slaughtered. Meanwhile, NoisyRoom.net and Right Wing News were purged from Facebook with other conservatives because of what Facebook and Media Matters have deemed as ‘wrong-think’. If only we had hearted a butcher like Mao, we could have stayed on Facebook. No great loss. 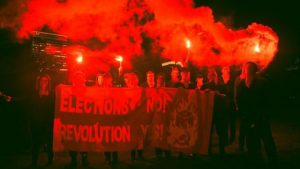 In Red Guard’s post, they called for a boycott of the “bourgeois elections” and advocated for organized revolutionary violence – subtle they are not anymore. They even had the stones to call for the formation of a “Red Army” that will destroy the existing state and replace it with a new authoritarian communist state:

Mainly this means uniting under Maoism, establishing self-defense units which are in time converted into a mighty Red Army, encouraging the self-administration of the community under the protection of this army, forming a new state posed to make war on the old.

They went on to call for armed violence which is their schtick: “Boycott the Bourgeois Elections! Elections, no! Revolution, yes! The ruling class will rule no more! Revolution, Peoples War!”