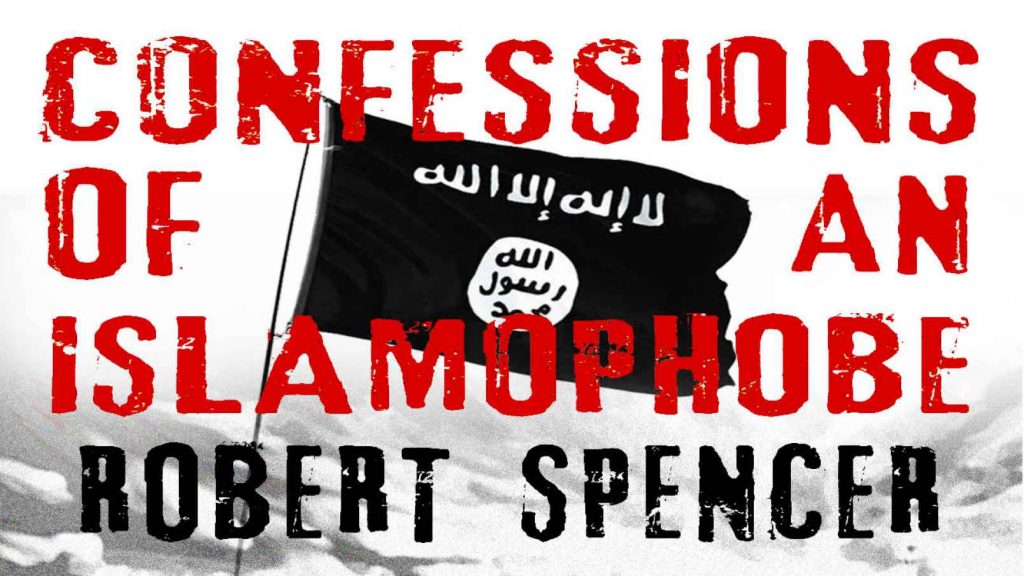 With the possible exception of freedom fighter and European political party leader Geert Wilders, there is arguably no critic of Islam more despised and feared by the Religion of Peace’s apologists than the David Horowitz Freedom Center’s own Robert Spencer, director of the indispensable Jihad Watch website and the author of nearly twenty books.

Spencer is routinely labeled a so-called Islamophobe by those who conflate criticism of Islam with bigotry toward Muslims. This makes him the target of an astonishing amount of hatred and even threats of violence because our media and political elites have inflated the purported danger of “Islamophobia” to a degree of cultural concern greater than the danger of actual Islamic terrorism.

The George Soros-funded smear organization known as the Southern Poverty Law Center has designated the “extremist” Spencer “one of America’s most prolific and vociferous anti-Muslim propagandists” (note the use of the inflammatory terms “propagandist” and “anti-Muslim,” the latter of which falsely paints him as a hater of Muslims themselves rather than as a critic of the ideology).

His speaking engagements, when they are not disrupted by protesters or canceled by those who refuse to debate him or even hear him out, require personal security to protect him from the violence of those who accuse him of inciting violence. After a presentation in Iceland earlier this year, Spencer was actually poisoned by a suspected opponent who wanted to silence him permanently.

Robert Spencer is certainly not alone in being branded an Islamophobe; he is simply one of the most prominent because he is the best-educated about Islam and the most relentless thorn in the side of those who would whitewash it. Any public critic of Islam’s demonstrably hateful, violent, and supremacist tenets risks being smeared by the ugly label.

The truth is that “Islamophobia” is a Muslim Brotherhood-concocted myth designed to discredit and demonize critics of Islam as hysterically alarmist and racist (even though – all together now – Islam is not a race). It is how Islamic fundamentalists and their allies among the radical left (in politics, academic and the news media) pervert the legitimate concerns people have about the very real threat of jihad in all its forms. It is how they silence criticism of Islam and prevent concerned citizens from speaking out against the encroachment of sharia law, of stealth jihad, even of terrorism. “If you see something, say something,” the authorities urge, but if you speak up about suspicious Muslims or point to the theological justification for Islamic terrorism, be prepared to be dismissed as a bigot.

Spencer has decided to embrace the scarlet letter “I” proudly. “It is not hatred and bigotry to be the right kind of Islamophobe,” he declares in his newest book, Confessions of an Islamophobe, “as opposed to one who attacks innocent Muslim, something that is never justified.” In fact, “[t]here are very good reasons to be an Islamophobe… to be concerned about Islam for the devastation that it brings into the lives of human beings both Muslim and non-Muslim.”

“Indeed,” he continues, “the only chance for the survival of free societies into the latter part of the twenty-first century may be if large numbers of people join me in becoming this kind of unrepentant Islamophobe.”

The multiculturalist left insists that an “irrational fear of Islam” among “the far right” threatens to morph into the persecution of innocent Muslims, turning them into “the new Jews.” This absurd and offensive accusation – no such Islamophobic blowback has ever manifested itself, even after the horrific 9/11 attacks – obscures the very real danger of an Islamic supremacism surging throughout the Western world, with our political and media elites running interference for it.

In chapters on women, gays, Jews, Christians, and even secular liberals and secular Muslims, Spencer details in his new book how these segments of society in particular face serious and even lethal ramifications for ignoring disturbing truths about the spread of Islam in the West. “I want free societies to continue and prosper,” he writes. “I don’t want to see future generations of American women subjugated, gays brutalized, Jews and Christians living in a harassed and precarious state. That seems to be what our leaders [in the Western world] are choosing for our future. I am among those who are trying to head it off.”

In Confessions of an Islamophobe, Spencer provides a mountain of evidence and examples of ways in which Islamic fundamentalists are advancing their “grand jihad in eliminating and destroying the Western civilization from within,” to quote from a revealing Muslim Brotherhood document known as the Explanatory Memorandum, discovered in the course of a 2007 terrorism funding trial of the Holy Land Foundation.

He also provides abundant examples of ways in which the Western left is complicit, either willingly or unwittingly, in the mainstreaming of support for this grand jihad, not least by demonizing Cassandras like Robert Spencer as “Islamophobes.” Politicians both domestic (e.g. Congressman Keith Ellison) and foreign (e.g. Germany’s Angela Merkel) and the media here and abroad seem literally hell-bent on facilitating the Islamization of the West, even as terrorist attacks, anti-Semitism, mass sexual assaults, no-go zones, and pockets of sharia law escalate in Western Europe and to a lesser degree – for now – in America.

As always, Spencer’s new book is solidly researched (with 33 pages of endnotes) and grounded in his scholarly expertise with Islamic theology. And yet Confessions is also the most personal of Spencer’s many books. It begins, in a preface titled “My Journey to Islamophobia,” with an explanation of his early interest in Islam and his admiration for figures such as Nathan Hale, Dietrich Bonhoeffer, and Alexander Solzhenitsyn, “who stood for their convictions even at immense personal risk, including even the loss of their very lives, and even when it seemed as if the whole world were against them.”

Today Spencer finds himself among that august number, facing immense personal risk himself by daring to raise the alarm about Islam, even though he is “fully aware that I may be on the losing side.” “I simply can’t renounce what I am doing, because I believe it to be right,” he asserts. “If it means taking abuse and opprobrium and humiliation, so be it.”

Confessions of an Islamophobe is not only a must-read for those already familiar with Robert Spencer’s work, but a perfect starting point for those unfamiliar with it, particularly those who know of him only as an “extremist” and “dangerous Islamophobe.” It not only is a concise catalogue of ways in which the rise of fundamentalist Islam in the West threatens all of us, particularly those demographics like gays and women that the left claims to care so much about, but is a proud apologia pro vita sua as well.

He concludes the book with a courageous declaration that should serve as inspiration for the rest of us “Islamophobes” who face the left’s defamation and hate: “[D]espite all the vilification, all the marginalization, all the peer pressure and all the shaming, this Islamophobe is not ashamed, and will never be ashamed, of sounding the alarm.”

“I am proud of my work. I have no regrets. How can I regret telling the truth?”