The deposition of UK’s former MI6 Spy Christopher Steele was recently released.  Steele was in a court case in the UK for slander related to his famous fake Trump – Russia dossier.   In his deposition Steele confirms that he was able to view and read sealed and classified US information that the average US citizen is not able to see.

In the recent deposition that was released related to Christopher Steele’s testimony in the UK, Steele unveiled something startling.  Steele stated that he was able to review sealed and classified documents from the US: 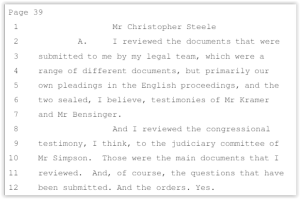 Steele was able to review the sealed testimonies of Mr’s Bensinger and Kramer. Ken Bensinger is the far-left Buzzfeed reporter that released the slanderous and unverified fake Trump-Russia dossier. […]