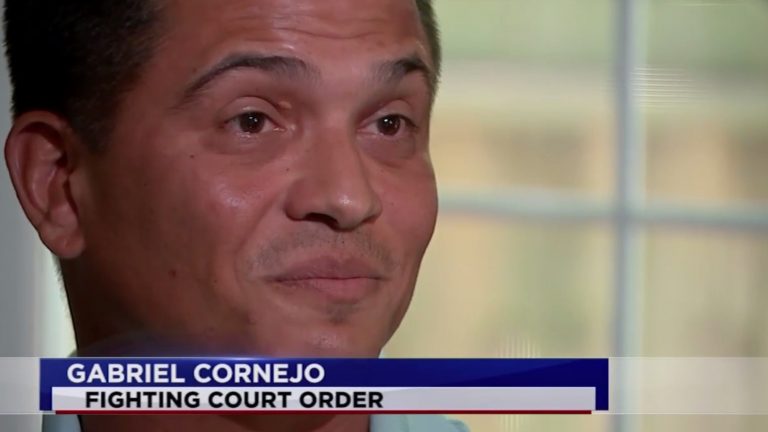 A Texas man is fighting a court order that says he must pay tens of thousands of dollars in child support for a child that is not biologically his.

According to the Houston Chronicle, a Texas court has ruled that 45-year-old Gabriel Cornejo owes his ex-girlfriend $65,000 in child support despite the fact that a DNA test last year proved he is not the father of her child.

The mandate stems from a child support court order in 2003 that said Cornejo owed his ex-girlfriend child support for her then-recently born daughter because the mother said there was no way Cornejo was not the father.

Cornejo, who has three children of his own and is raising two of his brother’s children, contends that he was never notified about the order until a sheriff showed up at his door last year to serve him papers claiming he owed the massive amount of unpaid child support. He then took a paternity test that proved he was not the child’s father.

But under Texas state law, that doesn’t matter. According to the Chronicle, chapter 161 of the Texas family code says that a potential father still owes child support for a child until that man is proved to not be the child’s father. That explains why Cornejo’s child support bill is so large.

According to KTRK-TV, court documents “suggest, but don’t prove,” that Cornejo was served a subpoena years ago about the child support, but he claims he never received it.

“I never thought in my whole life I would have to defend myself of something that I am innocent of,” Cornejo told KRTK.

Cornejo’s lawyer, Cheryl Coleman, told the Chronicle that she has discovered evidence that proves her client was never served papers when the court made its original ruling.

“I’ve researched the records and found that there is an issue with the service where they served him back in 2002,” she told the Chronicle. “There are some anomalies with how this case handled by the attorney general’s office. He was never served with those documents in 2002 when the actual paternity petition was filed against him.”

However, the ex-girlfriend’s lawyer, Carel Stith, claims that several years ago the state of Texas garnished several payments from one of Cornejo’s paychecks and he never fought it, which makes him appear culpable in court.

“Don’t stick your head in the sand,” Stith told KTRK. “It won’t go away, and there can be consequences even if you don’t do anything.”

Because of existing Texas law, Cornejo has few options to resolve the matter. He and his lawyer can request a judge re-open the case to reconsider the ruling, otherwise, he will be required to pay up. And if he doesn’t begin paying, he could end up in jail.

The case is due back in court next month.

In the end, no matter the outcome, Cornejo told KRTK that he just wants the existing Texas law to be altered so no others will be held responsible for child support for a child that isn’t theirs.

This isn’t the first time a Texas man has been required to pay child support for a child that isn’t biologically his.

In fact, these cases are frequent enough in Texas that the state attorney general’s website addresses them in the “frequently asked questions” section of their website.