Patton Oswalt, one of the creepier Hollywood figures and self-described “comedian,” took to Twitter early this afternoon to joke about the very real issue of child sex slavery.

🎶Pimps all over this world…🎶👶👶🌎🌎 pic.twitter.com/7n5eQZinkV

“Pimps all over the world,” he tweeted in response to a tweet from Roseanne, who was praising President Trump for rounding up child-enslaving perverts in droves.

His tweet also included emojis of infants, ensuring his followers that he was “joking” about child rape.

The “joke” is an apparent reference to the Ludacris song “Pimpin’ All Over The World.”

“My Administration will focus on ending the absolutely horrific practice of human trafficking,” the White House said in a statement. “And I am prepared to bring the full force and weight of our government, whatever we can do, in order to solve this horrific problem.”

In the last three days alone, a Hartford, CT man was arrested for sex trafficking, five suspected gang members were arrested and indicted on 44 counts of criminal activity related to child trafficking in Suffolk County, NY, which includes Long Island, and a man and his girlfriend were sentenced for conspiracy to commit sex trafficking of minors near Greenville, SC.

Oswalt’s “joke” did not sit well with actual comedians.

The hilarious Owen Benjamin posted his thoughts on Facebook: 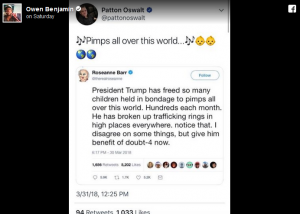 “So doing jokes about children being sold into sexual slavery is all good in Hollywood, but I’m that bad guy,” Owen wrote. “Sick people.”

Benjamin went further on Twitter, suggesting that Oswalt and his tacit support of pedophilia will land him in hell.

People more angry at words than child rape will burn in hell.