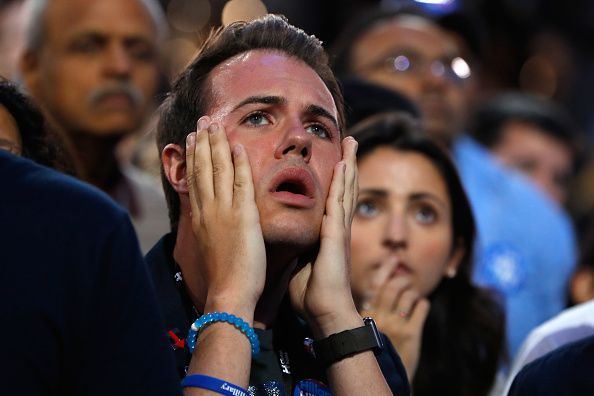 The Democratic Party is looking at Donald Trump’s approval ratings and sees an opening. Maybe they can ride a blue wave and retake Congress, except it’s already off to a bumpy start. For starters, the Democratic Party has no message, no leader, and no agenda. Yes, that “better deal” was pitched, but it’s vanished largely forgotten by voters and for good reason. It was a carbon copy of Hillary Clinton’s failed 2016 campaign platform. Democrats need 24 seats to flip the House and they’re viewing GOP districts in which Hillary won as their road to victory. Yet, that’s the issue. The road to the majority goes through red districts, but they’re not receptive to Democratic politics. In some areas, and fellow Democrats have noted this, House Minority Leader Nancy Pelosi (D-CA) is more reviled and unpopular than Donald Trump. The red flag for this was Jon Ossoff’s defeat in Georgia’s sixth congressional race, the most expensive in history. The special election was held to replace former Rep. Tom Price, who is now Heath and Human Services secretary.

Ossoff was unable to break 48 percent. It was the largest turnout for Democrats in ten years—and he still lost. At the end of the day, some moderate Republicans may not like Trump, but they’re not flipping for the Democrats. Furthermore, surveys have shown that a) there are not enough suburban districts to win back the Democratic majority; b) every suburban district is different; and c) even if every Hillary voter who a GOP member of Congress flipped in 2018—it would not be enough to win back the house. Democratic attacks against Trump on personality and policy have also failed miserably, with the added obstacle that every core item of the liberal agenda falls flat with voters—minimum wage hikes, free college, and even health care register at low levels with those outside of the base. Single-payer may seem sound on paper, but once details are fleshed out, support drops. Even at the outset, voters view the latter with a healthy amount of skepticism concerning benefits and costs.

Now, one candidate in a targeted race, New York’s 27th congressional district, has decided to call it quits after donors felt that she couldn’t beat the incumbent Republican (via Free Beacon):

A top Democratic recruit in an upstate New York district the party is hoping to flip in 2018 announced she is ending her campaign, citing unrealistic fundraising demands by the party for a race her donors don’t think can be won.

Erin Cole announced in July she would be running against Republican representative Chris Collins in New York’s 27th district, which the Democratic Congressional Campaign Committee (DCCC) labeled as one of its targeted districts earlier this year. Cole, an Army veteran, was immediately celebrated by party officials for her “exciting resume” and deemed a “serious contender” in the district.

Cole announced this week on Facebook, however, that she was putting an end to her campaign because her donors are unwilling to meet the DCCC’s calls for her to raise $350,000 each quarter through next November.

“After speaking with multiple donors, PACs, and some unions, the majority think that a Dem can’t win this district,” she wrote.

Now, Republicans shouldn’t get cozy. We still have health care, immigration, and tax reform to get through Congress. Democrats have yet to figure out that voters don’t like them—and that’s the saving grave for the GOP. It’s just that the Left is much, much worse than the GOP. That could change if congressional Republicans don’t get moving on legislation. For the Left, Democratic operatives are also warning that Trump’s low approval ratings don’t mean a wave is coming. In fact, some have noted with that logic, the party is once again heading for the cliff. In NY-23, it looks like that’s already happened.