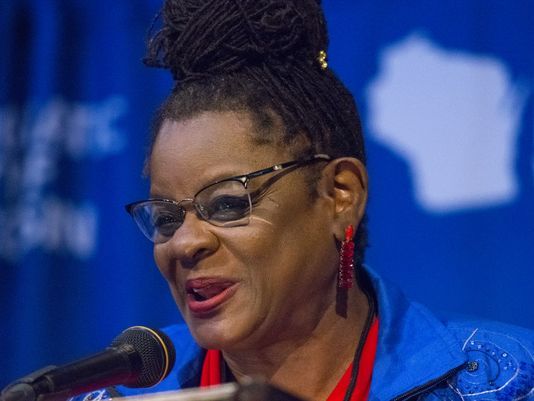 A Democratic congresswoman was not pleased with President Trump’s remarks about the violent clashes in Charlottesville, Virginia yesterday and has called for the president to be removed from office. No, it’s not Maxine “Ragin’” Waters (D-CA); it’s Rep. Gwen Moore (D-WI).

The president blamed both sides for the violence that occurred last Saturday, where white nationalists were protesting the removal of a Robert E. Lee statue. Left wing counter protesters arrived and brawls broke out. Many were sent to the hospital, but the day took a very tragic turn when a white nationalist—James Alex Fields Jr.—plowed through a bunch of counter protesters, injuring 19 and killing one woman. There is no doubt that the fact that a white nationalist killed a woman changes the game. Antifa and their left wing allies are bullying thugs. They’re violent. They cause trouble, but their absurd antics didn’t lead to someone’s death in this case. Overall, yes, you cannot have a discussion about the heated political rhetoric and anti-free speech antics occurring in this country without talking about and condemning Antifa as well. Yet, that’s in a general sense. With regards to Charlottesville, you can still say Antifa are thugs, which they are, but the level of violence committed from both sides was not equal due to the vehicle attack. That being said, I don’t feel that a statement with which you find disagreement is cause for impeachment (via The Hill):

On Tuesday, Rep. Gwen Moore (D-Wis.) took that argument a long step forward, urging the removal of Trump, as well.

Moore, a member of the Congressional Black Caucus (CBC), said Trump’s remarks on Tuesday defending some of the white nationalist protesters in Charlottesville — while blaming counter-protesters, in part, for the eruption of violence — is evidence enough that Trump is unfit to serve as president of a country derived of multiculturalism.

“As we once again hear Donald Trump defend those responsible for the deadly riot in Charlottesville and receive praise by hate groups like the KKK and neo-Nazis, the time has come for Republicans and Democrats to put aside our political differences and philosophical debates for a higher cause,” Moore said in a brief statement.

“For the sake of the soul of our country, we must come together to restore our national dignity that has been robbed by Donald Trump’s presence in the White House,” she added. “My Republican friends, I implore you to work with us within our capacity as elected officials to remove this man as our commander-in-chief and help us move forward from this dark period in our nation’s history.”

Trump removed from office because you don’t like what he said; that’s not going to happen.