“You’ve lost that loving feeling.” Indeed you have.

Don’t get us wrong — it’s not like Republicans should kick back, relax, and just expect to win upcoming Congressional races — but if the following ad campaign is any indication, the GOP has very little to worry about from its Democratic rivals. Dan Helmer, Democratic candidate for Virginia’s 10th congressional district, just released his latest campaign ad and it’s, well, simply horrible.

The ad, dubbed, “Helmer Zone” is now being slammed on social media as the worst ever. The Free Beacon sums it up:

The ad became popular throughout Twitter after Mic reporter Emily Singer flagged it as potentially being “the worst” she’s ever seen. 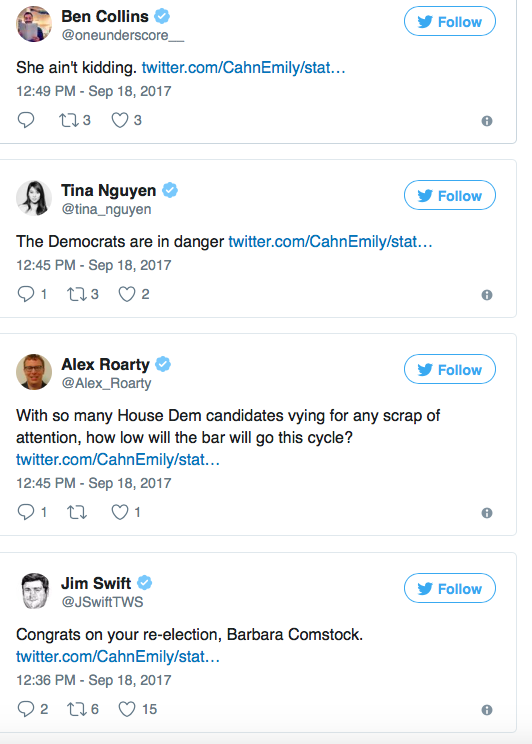 It features candidate Helmer, wearing a shirt with “veteran” on it, and spotting current 10th District Rep. Barbara Comstock (R., Va.) at a bar. The scene is inspired by the classic 1986 Top Gun bar scene and is chock full of Goose/Maverick references, from The Righteous Brothers’s “You’ve Lost That Loving Feeling” to “danger zone.”

“Bet you can’t get her to hold a town hall,” a woman tells Helmer.

“Town hall? I’ll do you one better than that. We’ve lost that loving feeling,” Helmer replies. […]

Helmer then sings, karaoke style, about Comstock’s lack of town hall meetings, and her opposition to Obamacare and Planned Parenthood, all complete with intentionally bad singing.

The crowd joins in the singing until Comstock leaves.

“Nice work, Dan,” the woman from the beginning tells Helmer.

“Thanks, Maverick!” he responds.

While we applaud Helmer for not going traditionally negative, it does reveal the true disconnect between Democrats and their constituents (both current and prospective). Rather than focus on the issues that matter to voters — to American taxpayers — Democrats are out of touch and in this case, just silly.

If this is the best a congressional candidate can do, we wonder if he should be running for higher office in the first place. Now, voters will be asking the exact same question.