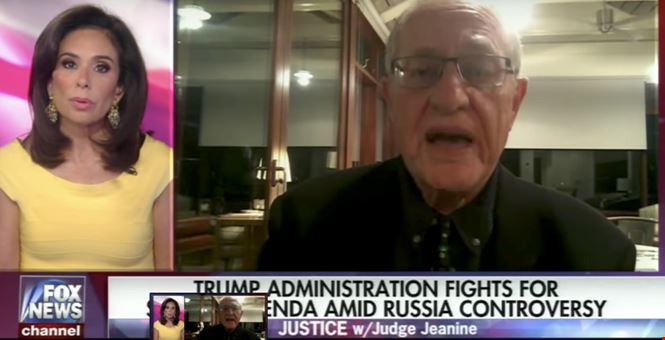 “I’m shocked as a civil libertarian, and a criminal lawyer and a liberal at how liberals are, some of them at least, prepared to stretch existing laws, talk about treason, talk about other kinds of crimes that just don’t exist when it comes to the facts as we know them about this meeting,” he said. “So I’m going to keep insisting we stop accusing people of crime when there is no evidence of crime.”

Pirro followed up, asking if receiving valuable information from a foreign national could be prosecuted under campaign finance laws.

“Of course not,” replied Dershowitz. “If it were to be prosecuted the First Amendment would trump. A candidate has a right to get information from whatever source the information comes. It’s like The New York Times publishing the Pentagon papers case or the Washington Post publishing material stolen by Snowden and Manning. You don’t prosecute the newspaper and you don’t prosecute the candidate or the candidate’s son. If the material was obtained unlawfully you prosecute if you can the people who obtain the material. But there is a First Amendment right of a candidate to use information. So you can’t include information under the campaign finance law, that would be unconstitutional.”

Pirro then wanted to know if there is any substance to the allegations by some liberals of treason and what, exactly, collusion means.

House Minority Leader Nancy Pelosi said last week that after the latest revelations about the meeting Donald Trump Jr. had with a Russian lawyer, that there was now “cold hard evidence of … the Trump family eagerly intending to collude possibly, with Russia … to influence American elections.”

She added: “It’s becoming clear … we have suffered a desecration of our democracy not seen since Watergate.”

“Collusion is not a crime unless it’s committing a criminal act. But the treason thing upsets me. When we with wrote our Constitution the British were using treason broadly against their kings. So the writers of the Constitution put a very narrow definition of treason. It is waging war against the United States. It’s inconceivable that anybody with knowledge of the Constitution or American history would argue a private citizen by securing information from for a campaign created treason,” he explained.

“It’s so dangerous to democracy to throw around these criminal law terms and accuse people willy-nilly,” he added.