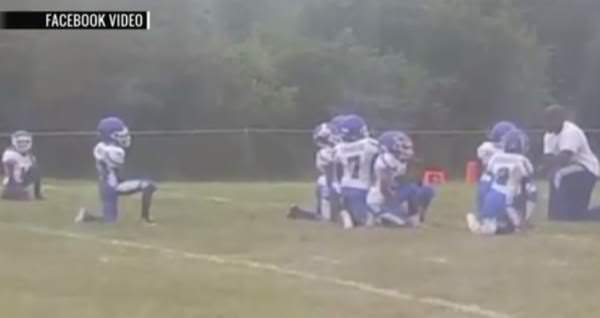 This is what they’re teaching the kids these days.

A football club of 8-year-olds and their coach in Cahokia, Illinois, near St. Louis, took a knee during the national anthem this weekend before their game.

Coach Gooden said his player responded, “Because black people are getting killed and nobody’s going to jail.”

Gooden, who played football at Mizzou, said the kids knew about the Jason Stockley decision.

“I felt like it was a good teaching moment for me to circle the team and have a meeting,” he said.

The coach said he spoke to them about that and other situations that have happened in our country. He then explained why former NFL quarterback Colin Kaepernick started kneeling during the anthem.

But this same coach says nothing about the thousands of black-on-black deaths in Chicago.