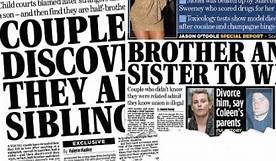 If you think Cosmo couldn’t top its already off the charts insanity, then brace yourself, because things are going to get really gross…even by Cosmo standards.

On top if its already increasing library of asine articles and idiotic subject matter, such as telling white children not to dress as Disney’s Moana, calling women’s orgasms sexist because men are gratified by them, and were actually sad that Texas women were having babies instead of abortions, Cosmo is now wanting you to believe incest is a-ok!

In an article titled “This Is What It’s Like to Fall In Love With Your Brother,” Cosmo recounts the tale of the troubled “Mellissa,” a woman who didn’t know she had a brother for 40 years, until one day she learned she did.

I’ll keep the story short here so you don’t have to read it, but the gist of the article is that Melissa was so attracted to her brother, Brian, and he to her when they first met, that they ended up having sex after one drink. Both were apparently married at the time.

Brian left his wife, and Melissa is still married to her husband — apparently, her husband is okay with her sleeping around — though she says her heart is with her brother. According to Melissa, the end goal is eventually to eventually move in together, and marry.

It doesn’t stop there. Cosmo tries to normalize this with science by trying to pass their incest off as a perfectly natural phenomenon called “genetic sexual attraction”:

There must be some natural explanation for these feelings, Brian remembers thinking. And according to them, there is. The half-siblings say they are prime examples of genetic sexual attraction (GSA). The term was coined by Barbara Gonyo in the 1980s after she experienced an attraction to the adult son she had placed for adoption as an infant. (She later started a support group for other families.)

Note that Cosmo admits the American Psychological Association doesn’t use the term “GSA,” but doesn’t note what they actually call it.

While the American Psychological Association does not use the term, GSA is what it sounds like: a phenomenon that occurs when two family members, who were separated early in life, eventually meet and experience an intense sexual attraction to each other — though not all act on it.

The article interviews psychologist Debra Lieberman who says that it’s common for people who are related to one another to feel a sexual attraction after having not seen one another for a long period of time. According to Lieberman, we recognize each other’s similarities and are instantly attracted to the familiarity.

But it’s been suggested that this feeling is even stronger for consanguineous (aka related) couples, especially those who don’t develop the ick factor from growing up together. Why? “Genes tend to shape our preferences, talents, and attitudes — and familiarity creates comfort, so we look for someone similar,” Lieberman says. “For siblings, this drives an enhanced sexual attraction.” Which is exactly what happened to Melissa and Brian.

Cosmo doesn’t make any effort to say this practice is immoral, disgusting, though it does mention that doing such a thing is bad for the gene pool. Instead, Cosmo looks at Mellisa’s plight with something that goes beyond intolerance, and may even border on sympathetic.

It doesn’t even call their relationship incestuous. It uses the term “incest” once to talk about why it’s nurture, not nature that makes us averse to sex with family. Instead, it gives Mellissa and Brian’s relationship the more politically correct term “consanguineous couples.”

Cosmo is, more every day, one of the worst publications in the world.