“The biggest terror threat in this country is white men, most are radicalized to the right.”

In September CNN released an article on US Terrorist Attacks. 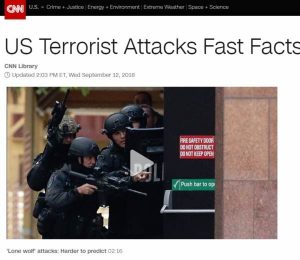 (CNN)Notable terror attacks with fatalities on US soil since 1980:

(CNN)Notable terror attacks with fatalities on US soil since 1980:

1978-1995 – Three people die and 23 others are wounded after a string of mail bombings carried out by Ted Kaczynski. “The Unabomber,” as he is also known, is serving eight life sentences for murder. He was not charged with terrorism, but the string of bombings is considered to be a terror case.