Perjury prosecution in the future?

Well, it seems the former boyfriend of Dr. Christine Blasey Ford has written an official statement about the fear of flying… rather NO fear of flying. 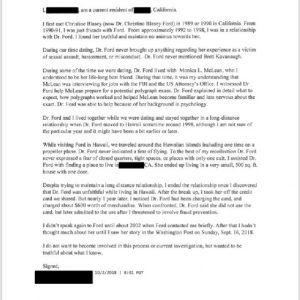 Meanwhile, as Dr. Ford’s two lawyers are trying to tell the FBI how to conduct this supplement investigation, it appears the FBI’s work is adhering to the scope as defined by the White House. If there are other indicators that more interviews need to be completed, the authority comes from the White House. We are now hearing that the FBI report will have ONE copy only and it will be kept in a safe for Senate access. This is as the Democrats don’t want the report released at all to the public as it seems Dr. Ford’s whole story and testimony is collapsing.

So, here comes Senator Booker. He among the others knows the whole Dr. Ford plot to derail the confirmation of Judge Kavanaugh is coming apart and is calling for another nominee, whether Judge Kavanaugh is innocent or guilty. You see, the sexual allegations are proving false so the new mission is to declare that Kavanaugh does not have the emotional control or intellectual acuity to be on the Supreme Court.