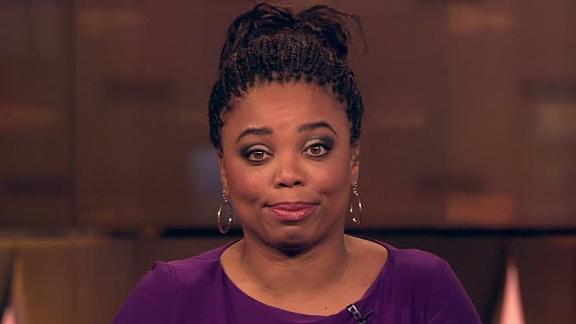 ESPN crank Jemele Hill took to Twitter on Tuesday to trash Donald Trump in a string of tweets on Tuesday.

Hill, who co-hosts the 6 p.m. edition of SportsCenter, started off by trashing Kid Rock and calls him a racist.

He loves black people so much that he pandered to racists by using a flag that unquestionably stands for dehumanizing black people. https://t.co/ukbl3RodoP

And then the ESPN host went on a twitter rampage against Donald Trump – calling him and his supporters a white supremacist.

And while you can certainly criticize black ppl for supporting Dems, the other side has done nothing but endorse/promote white supremacy

In response to her disgusting string of racist tweets ESPN gave her a slap on the wrist.

ESPN “addressed” this with Jemele and she recognizes her actions were inappropriate.