This weekend, a woman by the name of Karen Monahan accused Ellison, currently a candidate for attorney general in Minnesota, of being physically and verbally abusive towards her. The allegations were posted on Twitter by Monahan, and were also posted on Facebook by her son Austin Monahan, in a post that has now gone viral. Monahan took to Twitter over the weekend in a series of tweets to support her son’s post about the assault.

Following Monahan’s allegations, another woman by the name of Amy Alexander also claimed that Ellison had abused her during a 2005 relationship. While Monahan didn’t provide any evidence of the domestic assault, there is evidence to support the second woman’s claims. 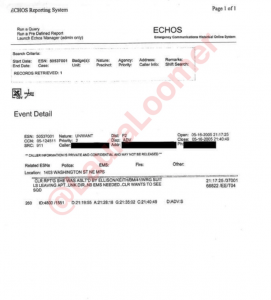 The caller’s name on the report has been redacted, but according to a records search under the name of “Amy Alexander”, Alexander  lived at 1403 Washington St NE, Minneapolis, Minnesota, which is the address on the reports, which documents the reported assault as taking place on May 16, 2005 at 21:17:25, which would be 9:17:25 pm.

Underneath the location noted on the report, the report says,

Keith Ellison is currently 55 years old. The age of the Keith Ellison noted in the police report from 2005 says the accused was a 41-year-old black male, another fact that supports Alexander’s claim.

Amy Alexander is a Democrat activist who said she was having an affair with Ellison. In 2006, she wrote an article called “Coming Out Of  The Dark: Breaking The Silence About The Anointed Candidate. The article was published by the Wright County Republican.