It looks as though Facebook has altered its algorithms overnight so that people posting conservative content receive a notice from Facebook that it looks like “spam” and has been declined.  Overnight, we have heard from many people about AT content being declined publication as spam.

Once the Facebook user responds that it isn’t spam, it appears that the posting takes place. 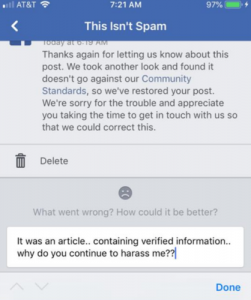 Clarice Feldman cautions against rushing to a conclusion.  She writes:

I also have no idea what is going on – whether (a) it is deliberate on FB’s part, (b) a glitch, (c) a concerted attack by leftists reporting anything to the right as against community standards or spam.

My guess is that words frequently used by conservatives are used as indicators of spam.  But who knows?

I’ve now posted three AT articles in a row and no such blocking.  Maybe they are testing the system to screen out bots.