An admin for the popular pro-Trump Facebook Page ‘God Emperor Trump’ was banned for 30 days due to hate speech after posting a BBC article explaining Israel’s immigration policy.

On January 2, 2019, an article was posted to the BBC revealing Israel’s intent to order African migrants to leave the country, giving them the choice between accepting $3,500 from the Israeli government to relocate or face imprisonment in the Start-Up Nation.

This article was shared to the ‘God Emperor Trump’ Facebook Page with the caption “God I wish that were America”, where it was posted publicly for over three days without an issue, until it was taken down by Facebook citing “hate speech” as the reason. 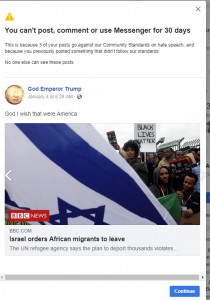 After clicking continue, the admin was greeted with a message indicating Facebook believed the post to be an example of hate speech.