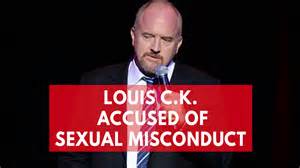 The flames of the Weinstein fire claimed yet another celebrity on Thursday when The New York Times published a scathing exposé on comedian Louis C.K., with five women all claiming he masturbated in front of them. The fallout has come fast and swift for the comedian, who has now been dropped from an HBO comedy special and had distribution of his movie cancelled.

According to CNN, HBO announced that Louis C.K. has been ousted from the upcoming comedy special Night of Too Many Stars: America Unites for Autism Programs. The Jon Stewart-hosted event featuring various stand-up comedians will still air as scheduled on November 18.

Worse still for the comedian, HBO also announced that all of Louis C.K.’s previous projects will be pulled from HBO On Demand services.

Louis C.K.’s relationship with FX, the network which produced his hit show Louie, said they are “very troubled” by the allegations and launched an internal review.

“The network has received no allegations of misconduct by Louis C.K. related to any of our 5 shows produced together over the past 8 years,” FX said in a statement. “FX Networks and [FX Productions] take all necessary actions to protect our employees and thoroughly investigate any allegations of misconduct within our workplace. That said, the matter is currently under review.”

Following the Times story, the premiere screening from C.K.’s most recent film, I Love You, Daddy, was cancelled. As of this morning, the film’s distributor, The Orchard, announced it will no longer be moving forward with the film’s release. The Orchard spent a reported $5M to acquire the film.

Louis C.K. has not commented on the matter.

The swift reaction against the comedian following the allegations mirror that of the repercussions that have befallen Kevin Spacey and Harvey Weinstein, both of whom were widely rumored or known within the industry as alleged sexual predators.