The Associated Press (AP), a mainstay of the mainstream media for generations, was forced to delete a tweet and issue a correction after providing false information about today’s hearing in the ongoing House impeachment inquiry.

“Contradicting the testimony of his own ambassador, President Trump says he wanted ‘nothing’ from Ukraine and says the #ImpeechmentHearings should be brought to an end,” the AP wrote in a Tweet on Wednesday. 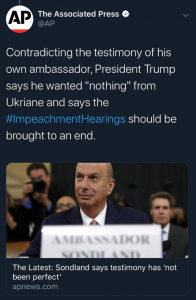 However, what the AP published was factually incorrect because Trump was merely referencing what U.S. Ambassador to the European Union Gordon Sondland testified before Congress.