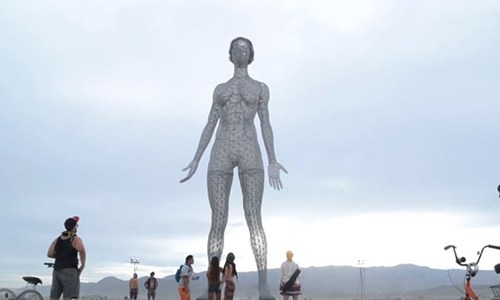 Groups are raising $90,000 to transport the statue, named R-Evolution, from San Francisco.

Leftists across the country may want to topple historic statues, but radical feminists from San Francisco want to erect one: a 45-foo-tall nude woman named R-Evolution, who will stand on the National Mall in D.C., facing down the Washington monument as a symbol of the “fight for womens’ equality.”

According to MSN, a progressive group based out of San Francisco wants to take the statue, which is one of three nude female statues from artist Marco Cochrane, tear it down, and move it to Washington D.C., where she can stand facing down monuments of “male oppression,” including the White House and the 555-foot “phallic” ode to our nation’s founder.

“These sculptures are about expressing what it would be like if women were safe,” the sculptor told media. “To me this sculpture answers that question . . . She’s absolutely fearless and accepting and being able to do that is a really powerful thing.”

R-Evolution would remain in place from November until March 28, just after International Women’s Day, and after the “Catharsis” festival” – a small ode to Burning Man that takes place yearly on the National Mall (the statue, of course, was “born” as an idea at Burning Man). Tourists will have only a short time in which to take their awkward selfies with the large, naked lady.

Unfortunately for organizers, the statue, which is made of steel rods, wire mesh and LED lights, would have to make a 3,000-mile journey to D.C., and construction crews would be needed to disassemble her in California and reassemble her in Washington D.C. They’re asking for $90,000 for the effort, but so far have raised only $15,000.

They also lack volunteers; R-Evolution would require round-the-clock security while she sits on the Mall, as well as her own group of artistic interpreters. So far, it seems, there aren’t enough unpaid workers to fill the slots.